﻿﻿﻿﻿ Charlie McCoy: If You Need Harmonica On Your Record, Call Me! » CountryZone.net ﻿

Charlie McCoy: If You Need Harmonica On Your Record, Call Me! 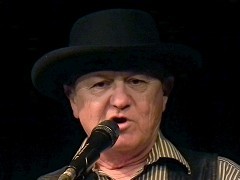 Charlie McCoy is a genuine country music legend. During the most famous era of the Nashville Sound he was one of the busiest session musicians and participated on thousands of legendary records by major country stars and the likes of ELvis Presley, Bob Dylan, Roy Orbison or Simon and Garfunkel. He was successful as a solo artist on his own and his original composition "The Real McCoy" earned him a Grammy award. Charlie McCoy is also a frequent visitor in the Czech Republic, where he regularly tours with the legendary bluegrass band Druha Trava and I got to interview him at one of their shows in Prague.

In your teens you were playing in a band with Johnny Paycheck. What is your earliest memory of Johnny's?

"Johnny Paycheck was a great country singer. After he moved to Nashville and some years passed, he started out as a harmony singer with Ray Price and Faron Young. Then he went solo and he has some big hit records. I was happy to play with him on two big hits, one was called 'Take This Job And Shove It' and one was called 'Slide Off Your Satin Sheets'."

When you were playing together in Florida, he was using the name Donny Young at the time. How did you meet?

"Yes, he was Donny Young and was a bass player in a house band. I went there to hear the band, then they asked me to come and play with them and later I started going there every Saturday night playing 15 minutes every hour with the house band and he was in the house band. But he wasn't there very long, because in a short time he left and moved to Nashville."

Back in the day when you went to Nashville, you wanted to be a singer. Can you remember the moment you decided to become a session musician?

"Yes, I watched the session. I watched Brenda Lee, who was 13 years old, record her first hit record. When I saw those musicians work, I said 'forget singing, I want to do this.'" 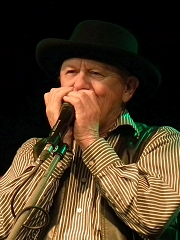 Back in the 60's when you were making music was there already a clear categorization of the genres like this is country music, this is rockabilly, this is rock'n'roll?

"Yeah, it was more defined back then. But as time passed, it kind of all bunched together."

Some musical critics say that Elvis, despite his own incredible success, consequently harmed country music and kind of brought it to a dead end. All of a sudden it was just rock'n'roll, which was on the spotlight.

"Nah, even though Elvis was considered an artist with country roots, he was never really that much played on country radio. So I wouldn't agree with that statement at all."

I heard that the Elvis sessions usually took place overnight. Was it common those days to record at night?

"It was common to record at night, but not all night and that's the way Elvis liked to record, all night. Number one, he liked the studio to be quiet and nobody else to be around but him and the musicians and when he would come to Nashville somehow the word would get out and there would always be a hundred people in the parking lot when he arrived just to see him. He preferred to stay up at night because when we got through, there wasn't anyone around. It was hard to be that big of a star, just no privacy, none."

You were also there when the Jordanaires invented the Nashville chord numbering system. Is it still being used today?

"Oh, it's being used more than ever now. The Jordanaires really were the first people that used it and I guess I'm the one who took it from them to the musicians. I know it's at almost every session you go to now, that's the way they make the music."

Even outside of the US?

You mastered something which seems to be very simple and it kind of reminds me of Roy Accuff doing yo-yo and Richard Nixon, who asked him to teach him how to do yo-yo. Was there anyone asking you to show them something what to do with harmonica, someone who you would never expected them to do so?

"No, most of the people that ask me are not musicians. There are people in Nashville, the fans when I play concerts, they ask me. They say 'do you give lessons?' Well, the truth is I don't give lessons, no. However, I just now started lessons on the Internet."

Two years ago you 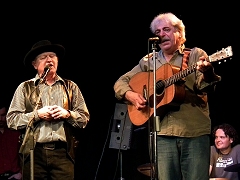 were inducted to the Country Music Hall of Fame and I'm wondering whether the membership involves any privileges or responsibilities like being able to attend future induction ceremonies or anything like this?

"Yes, I can attend all of the induction ceremonies. In fact ever since I've been inducted I've played music the following inductions. And I'm also allowed to go through the Hall of Fame anytime I want to and take as many people as I want."

What items have you donated to the Hall of Fame to represent you?

"They have a hat and other things that are on loan. At this point they have my Grammy award, my two Country Music Association awards and my seven Academy of Country Music awards. But I gave them the hat. They have borrowed those other things."

Some people say that the highest achievement in country music is winning the CMA Entertainer of the Year, some say it's a membership to the Grand Ole Opry and some say it's the Country Music Hall of Fame. How do you look at it?

"Well, I think they're all important. I would like to be a member of the Grand Ole Opry. I had a chance some years ago but I didn't think the time was right, then the management changed. But I've got to pursue it when I go back home. I made up my mind and I'm gonna go and have a meeting with the guy. But you know, hey, whatever. Entertainer of the Year is nothing I can ever... I couldn't have done it even when I was hot, because I'm considered an instrumentalist and they're not gonna have any instrumentalist as the Entertainer of the Year. It's just not gonna happen."

Do you still do studio sessions?

What are some of the latest projects you've been working on?

"I just finished a new album. It's a tribute to Hank Williams."

"Well, there's some vocals on it. I have some guest on it, the daughter of Hank Williams and two country singers, Ricky Skaggs and Roy Clark. Roy Clark and I were inducted at the same time together to the Hall of Fame. Those three guests are on the record plus, of course, a lot of great Nashville musicians as well." 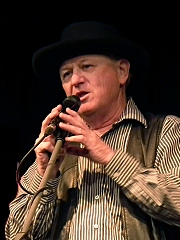 Before you first played with Druha Trava, did you already know anything about playing in the Czech Republic from artists who had played there before?

"No, I received the call from a guy called Petr Kuklík and he asked me if I would be interested in playing a festival in Strakonice. So I came over. I was already in Europe, I wouldn't have come probably from Nashville all the way just to play one festival. I was already in Europe. I play quite often in France, so it was an easy trip to come over here from France. So I came to Strakonice and that's where I met Druha Trava."

Druha Trava isn't the only Czech band you've worked with. Every now and then you share the stage with the Country Sisters, who also played on your Christmas album Charlie's Christmas Angels.

"Yes, the Country Sisters. We've toured twice together in Denmark, but it's been a long time ago. Yeah, I did another Christmas album and they did a guest vocal on it and it was very good."

Are there any other Czech artists you would like to work with?

"I don't know too many Czech musicians other than Druha Trava. But I worked with Wabi Danek and onstage with Pavel Bobek."

Do you know the Czech band Fešáci?

It's one of the most famous country bands in the Czech Republic and for many years they've been opening their every show with 'The Real McCoy' on harmonica.

"Really? I need to get some royalties from them!" (laughs)

How do you feel playing in the Czech Republic?

"I love it, it's great here. Of course, I play with Druha Trava, they have a great reputation, so all the concerts are very well attended and the people here love music. I mean they really listen to every note and that's really great. I like that because in other places in Europe you play festivals and everybody's drinking beer and 'hey, play another song!'" (speaks with a drunken voice) "It's great here."

You've been touring for quite a long time with Druha Trava. Have you picked up any Czech from the boys?

"I know how to say 'děkuji' (thank you) and 'na zdraví' (cheers). Two important things!" (laughs) 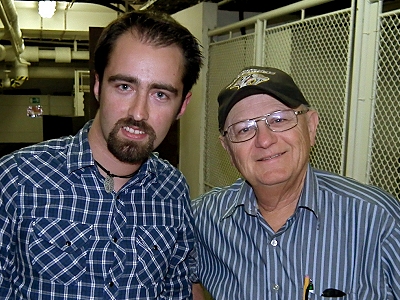