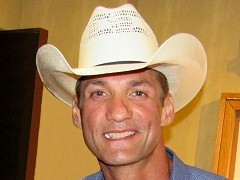 Wade Hayes burst onto the country music scene with the #1 hit "Old Enough To Know Better" and quickly followed with a handful of another successful Top 5 hits. In later years he continued releasing very solid independent records until 2011, when he was diagnosed with stage 4 colon cancer with 12% chance of survival. Miraculously, Hayes managed to beat cancer (twice) and since he got healed he's released two new stellar albums "Go Live Your Live" (2015) and "Old Country Song" (2017). These days besides his own touring Wade Hayes also shares his story to give other people hope and strength to overcome their personal life battles.

When you started out and your very first single hit #1, you were very young at the time. How did you handle all that sudden publicity that you got?

"I was too young to handle all of that and, of course, I wish it would have happened at a later age, because I made probably not the best choices businesswise and it was too much to handle. I'm from a rural area, literally a country boy who had barely been anywhere. And all of the sudden you are semifamous. It was a lot to handle, but I'm very thankful I still get to do it for a living and I've had some wonderful success and opportunities and I'm very thankful." Early in your career when you worked with Don Cook, you also worked and toured with Brooks & Dunn. Can you recall any pranks that you played on each other?

"Absolutely! We had a lot of pranks during those days. I remember one time Kix put a dead frozen eel, a big one, in Faith Hill's bed. And we all ran out on stage and squirted them down with squirtguns in the middle of their show. They chased me around and tried to handcuff me to a plastic blow-up sheep. Anything you can think of, it was crazy, but a lot of fun, it was a wonderful time."
What did you learn from them?

"Just basically the desire to write better songs and to sing better. Those guys had great relationships with their fans. I'm still friends with them, especially Kix. Kix really helped me out when I got sick. He got me into the best hospitals with the best doctors and I'll be eternally grateful to him for that. They are wonderful felllas." I really loved the tracks that you did with Mark McClurg as duo McHayes and I think your version of 'Tulsa Time' is still the best one ever recorded.

Are you still in touch with Mark?

I think that a couple of years ago you would have never imagined that one day you'd become a motivational speaker. How do you feel about this new role and the way you can inspire people?

"You're exactly right about that. I would never ever have imagined that. But I feel like it's such a miracle that my life was spared. I was given a 12% chance of survival when I was diagnosed. And it's been such a miracle and people ask me all the time how I made it through it. I really feel the need to share it with them. I'm a very private person but that I've really been compelled to share, because simply my life was spared and I had some great help and I thank God every day that I made it through that. And actually what kind of spurred all of that was when my own onkologist told me and introduced me to a man that had been diagnosed similar to me and he had still been alive after 8 years, which is pretty atypical. And it gave me so much hope and I felt like they did so much for me I've got to do that for other people. So that's why I do it."
Statistics say that more people are afraid of speaking in public than they are afraid of death. How did you handle that fear of giving public speeches?

"Well, I always have my security blanket, which is my guitar, with me and I'll do a song or two to kind of get myself aclimated to the audience and then that seems to make it easier for me. But then I just tell my story, an abbriaviated version, of course, of my story and then I speak to people afterwards and I hug them and pray with them and try to help any way I can."

What is the primary message you want to share with people? If you were to sumarize the key thought, what would it be?

"It would be to pray and to put your head down and move forward. Always move forward and try not to think about where you are, but think about a time when you're through this. That's what I did. Somebody told me that and it helped me more that anything. It's to just think of it as it's already passed, as it's already finished. And that's what I did and it really seemed to work. I cannot take credit for anything that happened to me, getting through this disease and being cancer free now, I cannot take any credit for that. I thank God and I thank all the people that were praying for me and helping me. I'm very very thankful."
Wow, you're giving me goosebumps. It's just so strong!

"It is strong and it is very important. You know, cancer is a horrible disease, very scary, and most people don't make it through stage 4. I had cancer everywhere and by a miracle we were able to get it all and then finish it up with chemotherapy and to this day I'm over two years cancer free. It's a great news."

That's amazing. Your album 'Go Live Your Life' was released through a crowdfunding campaign. What was your impression of this process? Did it meet your expectations? "It did. It's very difficult in some ways, but it was wonderful. I couldn't believe, I was really amazed of how many people still cared about me and wanted to help. We exceeded our goal and I was able to donate some of that money to Vanderbilt Cancer Research, which was wonderful. So many people coming and donating their money and buying the things that we had to offer. I would do it all again if I had to. It was wonderful."
Do you think that involvement of your fans played a key part in this?

"Absolutely! The fans played the biggest part in it, I would've not been able to do it without them. There was some memoribilia from my past that they wanted and I sold all of that and I've done some house parties and it was really, for the most part, really good. The only downside is autographing all those CD's and handwriting all those lyrics out. That took a long time, but other than that it's been great."

Have you ever been to Europe? "Yes! I've been to Denmark and I've been to France. I loved it and I would love to go back. I love Europe. I love the people there, they're so kind, so nice."

In Europe we appreciate traditional country music, so people would love to see you over there.

That's great. Thank you for the interview and see you in Europe.