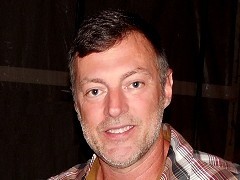 Darryl Worley has scored a bunch of hits including "Awful, Beautiful Life", "Tennessee River Run", "I Miss My Friend" and a patriotic monster hit "Have You Forgotten". He is also a very nice and humble guy. I sat down with Darryl during his recent tour in Switzerland and we talked about his music and plans.

You started out as a songwriter in this business and based on your roots and musical heroes, I wonder what it felt like to have a song recorded by George Jones.

"It was one of the highlights of my whole carreer. Of my life, to be honest. Not to mention the fact that it was really the last song that he had that got any kind of significant airplay on mainstream country radio. It was a single for us and just a huge blessing. In my parents' mind, I remember my father caling me when the record came out and he said: 'you've hit the top, you can come home.' So it was very exciting. A month or so later I found out that Charley Pride was recording another of my songs and that it was gonna be his album title, so that was another great thing."

Nowadays many artists are running their own independent labels and putting out music on their own. My question is what key lesson you learned while being on Neal McCoy's label.

"I think the key lesson that I learned over there is whoever you have brought on board as investment, whoever your investors are, you need to have the right kind of working relationship with those people and a good line of communication. And also probably a contract surely to protect yourself. You know Neal just got a rug pulled out from under him at the end and the money just went away. We actually had a pretty cool thing going on over there and I think we might have wound up making some good money had it continued. We had another hit song at it when it happened and it just went upside down. It's very important I think if you're not funding it yourself and you have independent private investors, you have to have a good relationship with those people."

Do you think that this experience prevented you from ever releasing music on your own?

"No, we have toyed the idea doing our own thing and that's still not completely out of the question. I have to make a decision soon about how to release the new music and that could be one of the angles." Your third album came out in quite an unusual format. It looked like a greatest hits collection based on just two albums. What was the purpose of it?

"We had just finished an album and it was brand new. And the song that was out was off the new album. So when 'Have You Forgotten' took off, it started with a performance on the Grand Ole Opry. And there was no release of the song. People heard it and they saw the response to it on the TV portion on Friday/Saturday night. And they started to download the live version of the song on the Opry archives and they were sending it out to their local radio stations. When the DJ's in the States heard this song, they quit playing the other one. So now we got this new song that's fast becoming a huge hit single and we don't have a product to put it out on. So we took songs from both of the earlier albums, that's like a half of the album. And they we took new stuff that was more patriotic and songs that were pointed toward our troops and those kinds of things. So it's like a compiation, one side of more the patriotic stuff and then the other side with the hits we've had already. That's how that came about."

Please tell me about the God & Country album. Do you think that those songs will ever come out?

"We did what we call a soft release with the military. We made it available as downloads for them and we sell that product on the road. But we have a new deal working right now with a couple of outdoor companies that may take the God & Country CD and package it with a DVD of a documentary we just finished and it has all of my journeys to the war zone and sell it as a package deal. And that's something we're maybe getting close on. It could be coming soon."

And the album One Time Around, has it already come out?

"No, it's brand new. It has not been released. That's the one I was talking about earlier. We're trying to figure out exactly how we wanna go about releasing that music. We thought that we had figured it out, three months ago we had an opportunity to do a single back on mainstream radio and it didn't all work out the way we thought it might. So I pulled back with that project. I own the project and I have it lock stock and barrel, so I don't want to take any chances with it. We spent a lot of time and money. When it's time and we get the right game plan together, that'll be coming." About ten years ago I published an article about the biggest country stars and I said 'well, let's put the number ones and record sales aside and let's really see once for all who the giants of country music are. And I listed a number of artists ordered by their physical height. And guess who topped the list!

Are there any situations in which your body size is an advantage and another times when it's rather inconvenient?

"Sometimes traveling can be very difficult, especially when you don't have exit road seats on the plane or first class, it's a nightmare. It can be a problem even on the bus if you don't have a bunk long enough. It's very difficult to find clothing that fits, but I've been very blessed for Wrangler jeans. I've been with those guys for thirteen or fourteen years and they've made every pair of pants that I've worn all that time, so that's been a true blessing. But I think, for the most part, the fans seem to like it. That's the most important thing and hopefully they do, because I can't change it." (laughs)

Have you ever worn a cowboy hat?

"Yes, years ago before things got started, I always wore a hat. I was talking to my father one day and I said: 'I just gotta do something to change my look, because I can't seem to get things going. I mean I've been really really close and it don't happen' and he goes 'why don't you take that stupid hat off?' So I quit wearing it the next day and six months later I got my record deal. So I guess I can't put it back on." (laughs) "I used to love wearing a hat. I still do when I'm working on a farm and stuff, I still have a couple of old hats I wear, but not to play in."

Country music fans are considered to be rather conservative. What were the reactions after you posed for the Playgirl magazine?

"It just kind of went crazy for a while. This was during the Neal McCoy time. They had some guys and some gals over there in their team that thought that would be a great idea. And the new album that was made with Neal was very different. It was more of a rocking album. One of the players that played in the studio, he said: 'this is angry music'. I think I was frustrated with the whole industry at that time and it sort of reflects that a little bit. But it was just one of those times in my life when I kind of went off the edge a little bit, but it didn't take long to find my way back." Do you still have the vegan restaurant in Alabama?

"Oh, no. I never had that. I've been asked that many times. We have a restaurant in my hometown in West Tennessee called the Worleybird Caffe and it's just been reopened. So it's back up and going again. One of my best friends bought the property and opened the restaurant back again. The only restaurant I was affiliated with was in Alabama, the Darryl Worley Saloon, and that was at country crossings. And I don't know where that whole vegan thing came from. I've never had a vegan restaurant."

That's funny. I think it was on Wikipedia. Well, I did my research and one of your bios said you had a vegan restaurant.

"I've had many people ask me about it." (laughs)

What's your take on social media? Do you personally talk to fans online?

"I do. I keep it general. My wife and I have a Facebook page and people love to come to there, because it's more the real thing. I have a Like page for my artist Darryl Worley page. My tweets go to the Facebook page, but the real Facebook is my wife's. I think it's under both of our names now, Darryl and Kimberly. But I do the Twitter and some Instagram stuff and I've learned that you have to be careful. You can't private message everybody and get that stuff going, because it's just crazy. I kinda keep it general, but I love the fans, they respond to a lot of my stuff. I've built my following significantly over the past years with our involvement with Pepsi and some other stuff, so it's been good."

Out of all the USO tours you've done, have you really got in any real danger? A life-threatening situation?

"Yes. We've had many close calls in the war zone. If you're out there traveling around, you're probably getting shot at, you just don't know a lot of times. We've been very very blessed. I wouldn't change anything, but I'm kind of glad it started to wind down, because the older you get, I have my child now, you start to realize that it's not all funny games. And those people are in a real war there, there's lots of people getting killed. They would like nothing more than to get big headlines like they had knocked off a bunch of us country singers that were over there entertaining, so it makes you think about things. I'd be proud when we can get the boys and the girls back home."

Is this your first time in Europe? Darryl Worley - "Have You Forgotten"

Who's The Biggest Country Star?
﻿