﻿﻿﻿﻿ Heidi Newfield: Getting To The Best Of It » CountryZone.net ﻿

Heidi Newfield: Getting To The Best Of It 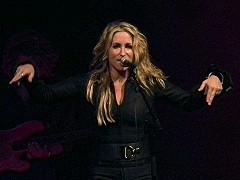 Heidi Newfield is primarily known as a former lead singer of Trick Pony, the high energy driven band who exploded on the country music scene in 2000. With their rebellious attitude and hardcore music they immediately built a huge fan base and scored with smash hits such as "Pour Me", "On A Night Like This" and "On A Mission". In 2006 Heidi left Trick Pony to pursue a solo career and two years later released her debut album "What Am I Waiting For". I interviewed the-always-sweet Heidi at the Trucker Festival in Interlaken, Switzerland.

In the biographies of yours that are available there's only a little information about you between the time when you first traveled to Nashville at the age of 13 and the time you joined Trick Pony at the age of 26. What were the milestones along the way that helped form your musical style?

"A great question. So many milestones. I think when I was 6 years old the first time walking up on stage, I grabbed the sleeve of a lead guitar player of some band. I was just interested in singing and I walked up there and that was the first time I knew what exactly I wanted to do for a living. One of the things that I was put on this Earth to do was to entertain and write and play and sing. And, of course, that was the biggest milestone. And along the way moving to Nashville out of high school, learning the roads, paying my dues, singing in a lot of honky tonks and bars and you meet a lot of dear friends that way. All of these musicians they see on the road a lot of people, we have a sort of a relationship, a family. And the good ones anyways, the real guys, the heart of it. I think another milestone is when I got the opportunity to record with some of my heroes, Johnny Cash, Waylon Jennings, Loretta Lynn, Hank Jr., so many, and everytime I had to just pinch myself. Another milestone playing the Grand Ole Opry. I'm a big fan of traditional music and what brought us here are the people who paved the ways. I'm a fan of the old-school traditional country and I like to stir it up and mix it ut with my other influences. So many milestones, very hard to point them all out. Lots of lessons learned and I think that now we're getting to the best of it." 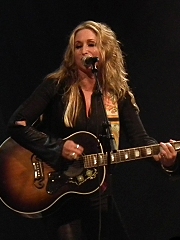 What do you consider as the greatest Trick Pony achievement?

"I think when we made the first album and we got signed after four and a half years of really working so hard together. Doing up and down the road as a band in a trailer, so many people do that. It's not that nobody does that, but you work so diligently and when you finally get that news that you're getting signed, and you're getting signed to the Warner Brothers records and they're so excited about you that they're gonna put you at the top of their roaster and you're coming right out with your new single that you've been playing and singing for four years, 'Pour Me'. That was probably one of the biggest milestones. All the love and laughter, the jokes, we have lots of wonderful memories, now looking back even the bad times, even the really crappy times, pardon me, were just a moment to live and learn. Probably also winning our first award, not for the accolade itself, but simply because we won the American Music Awards, which is a multi-genre awards show. So there we were looking down like Snoop Dogg, P. Diddy, there's Tim McGraw and Faith and all these people, we're sitting there just like 'what are we doing here?'. And we got called out and I think just being included in the family I guess, you thought like you were kind of one step closer to being a part of it all."

When you were opening shows for Brooks & Dunn, were you playing any pranks on each other?

"Yeah, there were many pranks played with Brooks & Dunn, yes. Actually Gary Allan on the first Brooks & Dunn tour pulled the best prank on us. It was the Brooks & Dunn show, Gary Allan was on that show and he turned over a box full of snakes on the stage as he knew I was afraid of snakes at the time, I'm not anymore. And of course I've got a wireless mike and I'm running all over the stage. It was in New Jersey, I'll never forget that. One of the best pranks that we played on Ronnie and Kix was that Kix told us that Ronnie was, how do I say this politically correct, Ronnie had a fear of little people. So we hired about 20 little people and they were all dressed up in Brooks & Dunn T-shirts, there were all these wonderful sweet guys and girls, just little tiny folks, and Ira put one up on his shoulders. I don't even know if this is out there in the world, I'm officially telling you that he had a fear of little people, so we marched all the way through the crowd and we had these big banners made that said 'we love you Ronnie' and these funny phrases like 'we may be little, but we have a lot of love for you Ronnie', that kind of thing. And we walked up in front of the stage and he came over by us and he realised there was like 20 little folks and us and he just pointed at us like 'I'm so gonna get you'. And Kix was on the ground laughing, he was rolling. It was a good one!" 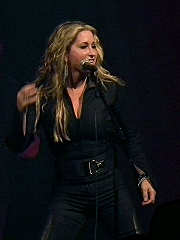 One of your first solo projects was Guitarzan, the crazy recording with Cledus T. Judd. Are you a big fan of Ray Stevens?

"Oh yes, of course. Cledus called me and we've been friends for a long time. Cledus called me and asked me if I would do this tribute record with him and I said of course I would and he picked 'Guitarzan'. I think Ray has been probably one of the most underrated brilliant businessmen and talents in our industry, so yeah, I enjoyed being a part of that."

I heard that you also participate in various horse competitions, like cutting horse, right?

"Yes, I grew up on a quarter horse ranch and so I grew up running horses. I could ride before I could walk. I got into high school rodeo as a little kid and I did really well in all that stuff, roping and I started cutting. I started working for a cutting horse trader in northern California, where I am from. And I loved it, I was immediately hooked. I loved the people, it's like the music industry, there's one group of people in the cutting industry and I love the rush. You can get on a cutting horse and that dirt's flying above your head, you're completely horizontal to the ground, that's a very very cool feeling."

Have you ever participated in any event with Lynn Anderson?

"Many times. We do the celebrity cutting event in Forth Worth, Texas every year. She's a friend of mine and I love her."

I also heard you were giving some advice to Lady Antebellum about working as a trio, is that right? 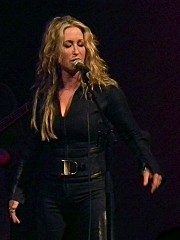 "oh, that was very toungue and cheek, not necessarily. I happened to live in an area where Charles' wife's, Cassie, mom and dad lived. Her mom has been my stylist for many years, did a lot of the Trick Pony videos and is a dear friend of mine. So when Charles and Cassie got engaged, it was on Christmas Eve, and my whole family was out in California, my husband's family was in. They happened to be upstairs in the media room watching a movie and Claudia and the whole clip crew came over to tell us, we were the first people they shared the news with, that Charles was getting married. So at the end of that and about four bottles of champaigne, maybe more, we really just started talking about the bands and balancing it all, it's very tough sometimes to balance three different personalities and the amount of time that you spend together. It's very much like a marriage. No advice neccessarily, just friendship and sharing thoughts. I think they're lovely people and I really really feel for their success, they deserve it."

Your first solo single was 'Johnny And June'. I know you had Johnny Cash on your first Trick Pony album, but did you get to meet June as well?

What is your favorite memory of their?

"My favorite memory is easy. Spending Christmas with Johnny and June. Ira and I went to Jamaica one year for Christmas specifically because Johnny had asked us if we would like to come and spend Christmas with them at their place at Mongeto Bay. So we went and spent the holidays with Johnny and June and it was very intimate, very quiet, just the four of us, very very very special memories. Hearing the stories from both of them. June was, in my opinion, one of the most funny, her comedic timing was amazing, her talent and the way she drew people in, she was so real and so organic and just precious. They don't make them like that anymore. I was really honored to get to experience both of them and their love and the way they would back and forth each other like a real married couple. They truly were in love. And that was, of course, the spur of that song. We didn't want it to be just a tribute, we wanted it to be a song that spoke to you, to me, to everyone, to all of us. And I'd like to think that's what we did."

Your new single is out. What can you tell me about the upcoming album?

"I can't divulge, but there are a couple of really special moments on this record. A couple of cameo appearances that are unexpected, very very cool. People I never got to work with before, so I'm very excited. I think this new record just steps it up. I'm just so proud how it's got together. I can't wait to get more music out and 'Stay Up Late' is just barely scratching the surface. "

OK, thank you and good luck! 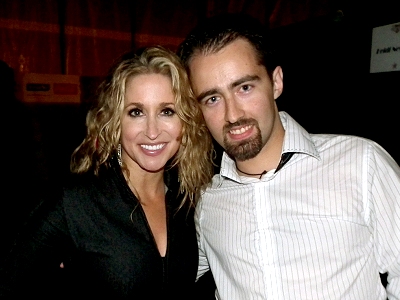