﻿﻿﻿﻿ Sawyer Brown: Music Is About Making A Connection » CountryZone.net ﻿

Sawyer Brown: Music Is About Making A Connection 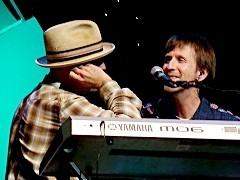 Sawyer Brown has been one of the most popular country bands since their TV debut on Star Search in 1983 and over the years they have scored a bunch of hits such as "Step That Step", "Some Girls Do", "The Dirt Road" and "Thank God For You". After more than 30 years on the road they show no sign of slowing down and their super-energetic shows still bring audiences to their feet. I met the band in Pigeon Forge, TN in July 2013 and before the show I made an impromptu interview with Hobie Hubbard.

After 30 years in the business you eventually decided to start your own label. What do you see as advantages and disadvantages of being independent?

"Advantage is that you can really work things, the music you want, on your timetable and the distribution once you've got that in place, because with us it's all about getting music out to the people and that seems to be the best way to facilitate that for us now. So it's all good at this point." I love the new song "Shadows of the Heartland". Is there a new album in the works?

"Yes, I think we got some stuff beginning to what looks like it'll shape it to be the next full album. That song, a writer named Bobby Pinson wrote that and we literally just heard it once and we were like 'OK, we love that song,' so we grabbed it."

What direction are you going on the next album?

"I think we've sort of homed in what sounds like us and it's nothing I can give you a definition of, but we look for stuff that's really based and feels like everyday life for us. That's really the heart of all of this for us, because if it doesn't hit home for us to begin with, you know we're not gonna cut it, maybe a great song , it just may not be a great song for us."

"Yeah, I hope so. I think there'll be stuff on that, because we were born and raised on commercial music, you know that's a lot of what we've done. It's like we've done stuff that feels like this is true to who we are, but that's also stuff that radio could play, if they decide to play it. But you never know how that part of the world works. You just do your best.

Whatever you do, just please don't rap. I know that you communicate with fans on Facebook. Do you find it essential to be in touch with the fans personally today?

"Yes, sure to answer. And I think Facebook is a great thing for that, because I know for me, the thing that I loved about music as a kid and still love about music, that it's about making a connection. And with Facebook, that's just one other way of continuing that sense of a connection and with ours, ours tends to be really lighthearted and fun, there's enough heavy serious stuff if somebody wants that somewhere else, it's always out there. So we tend to go just for something that's lighter and I think it's a great way to keep our large scale conversation going."

And how about the other guys? Do they also go online? Because I know on Facebook it's mostly you.

"Yeah, on Facebook it's really mostly me. But everybody's a web surfer above other things, but that's just not the Facebook stuff."

Are you still in touch with Mac McAnnally?

"Oh, all the time! We sort of look at Mac as the sixth Sawyer. He was a true brother. To me he's a great writer as exists in any genre of music. And just a great friend. So yeah, we keep up with Mac all the time. He's out there with Jimmy Buffett right now." Have you ever played in Europe?

"The only time we've actually been, we went for a USO tour. We were in Germany and got to do a little bit of sightseeing in a few other countries, we only got to spent two days there. That was the only actual playing we've ever done as a part of the USO tour. We'd love to, it'd be a great time."

How many dates a year do you play now?

"We do about 75 to 80 cities every year, which is great. And you know the summer is usually the busiest part of the year for us right now. But that's all good, we're out a few days every month even on the slow part."

Do you go everywhere by bus?

"Most of the time. We'll do some flying when the routing is just really super crazy, but most of the time it's by the bus, which is the way we really love it. That sort of becomes your home away from home. I get better TV on the bus than I get at home." (laughs)

The very first item I ever bought on the Internet from America, which was very complicated before online payments, was your live DVD. I really love it and play it all the time, but it's a little too short, just 9 songs. Do you think you'll ever release something similar? OK, my last question. There's something I've been always wondering about. Does Mark do the same dance moves for each song every night?

"No, and I think it's flattering to call those dance moves. I'm not exactly sure what that is. But no, it is not the same thing night after night. It is literally just whatever happens, which is true about a lot of the show. I think he keeps it fun for us, because it is really about going out there and have a good time with the audience. They are the key ingredient in all of it, so it's about making sure they're having a good time."