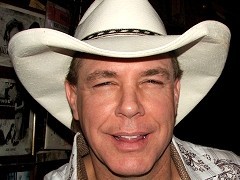 This time I met Michael Peterson in Nashville, we went to dinner a couple of times and one night he showed me around bars on Broadway. When we walked in Tootsies, Michael's presence gained so much attention, that he eventually had to come up on the stage and play something. In recent years he has been very busy with various charitable work, annually holds a special celebrity tractor race at the CMA Music Fest and also frequently travels to military bases around the world to entertain US soldiers. Except for that he is constantly making new music, which he releases on his own. There was much to talk about in an interveiw I made to get details on his current acitivites.

You started co-operating with the New Holland tractor dealer in 2006. How did this collaboration start and what activities it involved besides the album you recorded for them?

"The New Holland relationship actually began in 2005. We made a CD for New Holland dealers and that was the only official thing that we did was to make the CD, that was the contract. But what became more than offical was the opportunity for me to do a lot of country music shows for people in the agriculture, to try to bring a reminder to them that we appreciate it, that they're important. That we respect them, people and farmers. So, this has been a lot of fun, the last three years or almost four years now, doing a lot of things with agriculture, a very large agricultural youth programme called the FFA, which has over 500,000 high school students who are in classes to learn about agriculture in America. So I do things for them, we raise money for them. We raise money for 4-H, which is another agricultural youth organization. Just a wonderful opportunity to work with New Holland, to make some music, make some new friends, have some fun."

If I remember well, you were also their spokesperson, right? 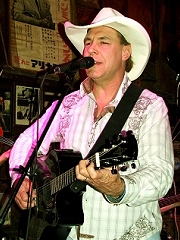 "Yeah, I mean it's a celebrity spokesperson, I had the opportunity to speak to large agricultural organizations like the National Farm Bureau, the National Farm-City Council, the FFA, 4-H, the Commodity Classic, which is the National Corn Growers Association in the American Soybean Association.Then the National Biodiesel Movement, the National Biodiesel board is headed by a guy named Joe Jobe. They're very connected to agriculture, because of bio fuels. So a lot of organizations have had a chance to speak about the dignity, respect the farmers, the relevance of farmers, the importance of farmers, how much they're valued, how much we appreciate them."

You also hold the Celebrity Tractor Race during Fan Fair.

"The third annual Celebrity Tractor Race was this June, the third year in a row. Next year there'll be the fourth. We don't know how long it will go on, but it's been a very successful event, lots of stars, a very unique event."

Who participated this year?

"It was won by a racer named Darby Ledbetter, who is a new country singer who is also a soldier. Who was in the race this year, some professional fotball players, some local radio celebrities. In the past year we had Ty Herndon, Tanya Tucker, Diamond Rio, Billy Dean, of course Billy Yates, different artists of that caliber."

Do you consider 'Down On The Farm' as an official Michael Peterson album or was it more of a special product from which you might use some songs for another album?

"It was a special product. 'Modern Man' came out in Europe only in 2004. There has only been one official album for me and that's the album 'In Black'. But I have done some speciality products 'Down On The Farm' and 'Grave To The Cradle'."

You just released two new albums. It's quite unusual to release two albums at the time. How do they differ from each other? 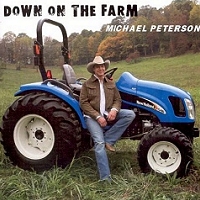 "'In Black' is a collection of songs, there's 11 songs on the CD, I only wrote two, which is very different for me. Normally I have written 9 and only 2 covers. I think it very differs from 'Grave To The Cradle' where I wrote most of the songs. So it's different in that way."

But why did you release two albums at one time?

"Because they were done, because I liked them, because I though people would enjoy them."

How or where can they be purchased?

"At this point you can't buy them from Europe. But very soon I'm getting them available on the Internet for people to be able to purchase on Amazon and things like that."

Tell me about the I Remember America project.

You've been supporting the troops in a great way, you've travelled to Korea, Afghanistan...

"Korea, Afghanistan, Iraq, Alaska, all around the United States."

When you traveled to the East, did you ever get in any dangerous situation?

"I can't really talk about it, except to say that we were on the road in a convoy and our convoy had been targetted from roadside bombs, IED's."

Did anybody get hurt?

"No, no one got hurt, I was traveling with a very prominent United States soldier and Al-Kaida had discovered that we were there and was targeting us, so it was a couple of hours very thoughtful. But it makes you realize, for me it was two hours, for the men and women in uniform it's every day. It makes you understand that commitment that they have." 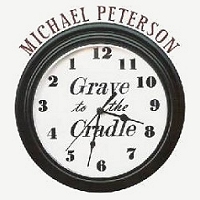 So it can be really dangerous for artists to travel and perform for the troops.

"Well, I've been there a lot and that was the only time I ever knew, so I haven't felt endangered for the most part."

Was there a lot of security taking care of you?

"Yeah, very much. They don't want an artist to be killed. You don't want anyone to be killed. But when you are likely to have your name in the paper, big deal, because you're a celebrity. There are different levels of celebrity. I'm not saying that I am famous when I say you're a celebrity, but when you're well-known and you're an entertainer, then some people say you're celebrity and if something happens to you while you are in Iraq, Afghanistan, it's a bad headline."

You performed in Italy a couple of weeks ago. Are you going to get back to Europe anytime soon?

"I would love to go back to Europe this next year. I have been invited by several people to different parts of Europe. I cannot wait to do that, I hope I'll have the opportunity."

Have you played in Europe before besides the show in Italy and the German Awards show?

When you play in the US and in Europe, can you see any differences in the approach of the audience?

"I can see some real differences. I remember when we played at the festival in Craponne. The first four five songs I wasn't certain if people were enjoying because they weren't making a lot of noise. And I thought maybe they aren't liking this and then I found out they liked it very much, they were listening. And I think American audiences listen in a louder way, they cheer more, they're having a party, and you play music and they're screaming and shouting while the music is played. I suppose in Europe in many places this happens but my experience with country music in Europe has been that when you play, people are listening more actively, they're listening more purposefully. They are focused on the music and this I like very much."

Do you think they appreciate the same kind of country music that is popular in the USA? 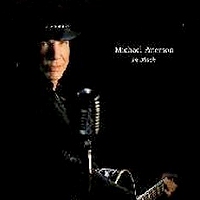 e's Duke Ellington said there's only two kinds of music. The kind people like and the kind people don't like. Everyone has different likes and dislikes. It seems to me that in Europe the country music audience wants more traditional and some of what is very very popular here could be considered not traditional enough in Europe. This is my impression."

Have you been in Europe on holiday?

"Actually yes, a year ago in March I went to visit my daughter in Germany."

Do you have any favorite places to visit in Europe?

"I do, I love Europe. I love history, I love art, and that is everywhere in Europe."

Are there any special places you are going to see like Paris or London?

"I've been to Paris, I've been to the Louvre, obviously that was amazing, I saw Mona Lisa, and the great art there. I've been to Milan, saw the Cathedral Duomo and saw the exhibit for the Last Supper. I've seen so many beautiful things, cathedrals, I've really been in a lot of beautiful places. And in Berlin twice. I went to the Pergamon Museum in east Berlin. That is a very special memory for me. I was there before the Berlin Wall came down, I was there after it came down. Hitler's Reichstag, Checkpoint Charlie."

Are there any places in Italy that you visited? Have you been to Rome?

"I didn't go to Rome, I went to Milan, I went to Torino, I went to Lake Como, it's beautiful. But I want to go to Prague. My oldest daughter has been to Prague. And she has been, I have not, this is wrong!" (laughs)

Did you see any pictures from Prague?

"Yeah, sure, so beautiful. My daughter came back she said it was her favorite city in all Europe. She's kept raving about it. So I have to go."

Alright, thank you very much. See you in Prague. 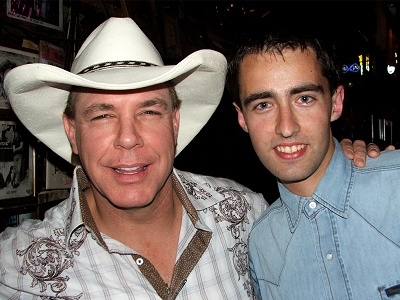 Michael Peterson: Fun Experience To Hear Yourself On The Radio
﻿