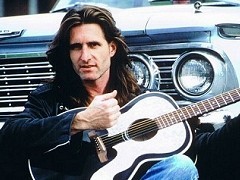 George Hamilton V is the son of country music legend and Grand Ole Opry star George Hamilton IV and is also a successful musician on his own. He is also quite popular in Europe thanks to his numerous collaborations with the Colorado Band from Poland, with whom he often records and tours European stages. In 2004 his collborative album with the Colorado band was awarded the country album of the year. George V is also a very successful businessman and it was a pleasure to interview him about his music career as well his exciting business activities.

Let's start the interview the way you suggested. So you play music, huh?

I was listening to some of your older stuff some years ago, but it wasn't traditional country music at all. How do you characterize your style?

"I started by traditional country because my biggest heroes have always been Hank Williams, Ernest Tubb, George Hamilton IV, Waylon Jennings. So, maybe it has some inspiration and also the heavy sound by Waylon Jennings. So it's from by the years when I grew up and then maybe more country rock heroes."

How long have you been playing music?

Do you think that your sound has changed through the years? 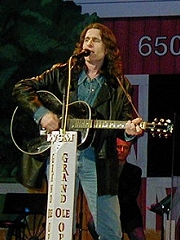 "Maybe. I don't know. I think it's interesting. In a way, maybe. To me it's more traditional. Because I think as you grow older, you know, I was very young. But as you grow just a little older, you tend to like ballads and that stuff."

How many times have you been to Europe?

"In Europe I have been so many times! It's very hard to remember. I have been to Eastern Europe, I have been to Slovakia, Poland, Estonia, Latvia, Lithuania, and one time I also toured Germany. Not recently, it was East Germany at the time."

And you also record music in Europe?

"Yeah, I record music with my Polish band. We had an album that was voted the Album of the Year in Poland in 2004. So I recorded an album with them. And now we're going to record another album, I believe, with my Polish friends and my Polish band Colorado Band. They have many albums themselves. We had so much fun touring and playing concerts and now the possibility to record an album with George IV, George V, Colorado Band, and also Michael Lonstar."

Do you play with your Polish band every time you go to Europe?

"Every time I play in the eastern part of Europe, yes. When I go to England and France, some parts of Germany, I play with my French band. I also have a band in England I sometimes play at festivals and stuff like that."

Well, you must be really wealthy to be able to pay them all. Three bands in Europe.

"Yeah, that's true!" (laughs) "But sometimes I have to borrow money. Do you have some money that I can pay them?"

Sorry, maybe later after I sell this interview.

Is any new album in the works now?

"Right now I'm recording an album as the Colorado Band and George IV. And right now I have an album that my French guitar player who leads my French band, we have written many songs for his album. And now two of the songs were released on Warner Music in France, so I just continue writing songs and waiting for the exact right time to put the album out. We still have an album called Honky Tonk Deluxe. I think it's still in Top 10 French albums. And that's like for several years. So I don't wanna knock it out of the charts, you know. I really wait until it disappears before putting out another album. But I have many songs ready to go. And you can visit, I think you are my friend on Myspace. Are you my friend as George Hamilton V?"

"And I also have myspace.com/georgevandcoloradoband, you have to visit the Polish band. I'm friends with myself on my Myspace, so if you want to find my other Myspace, you'll just find that. I'll be my best friend and you can be friends with all friends." 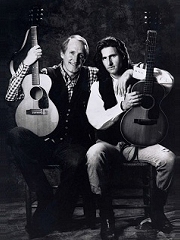 when I was still at high school, I was looking for your website, and all I found was NashVegas. What's that? Now I can see various items with NashVegas logos like posters, cups, T-shirts and other silly things. Do you own the trademark?

"I do own the trademark and I'm very excited about that. When I started with my band the NashVegas Nomads, it was about the time that Emmylou Harris had the band the Nash Ramblers. And I thought I would be fun to have the NashVegas Nomads. NashVegas is a fun name for Nashville. Back then I created this name and I created what would be like a motto or a battle cry, which is Viva NashVegas, for more energy and excitement. Then I would go to record labels and even managers and they said you must stop this NashVegas. No more NashVegas Nomads, you're making fun of Nashville and the music industry. And I thought to myself, these people are crazy. So I continued and kept on going, Viva NashVegas, and today, it's interesting, recently NashVegas was voted #1 name for Nashville. Over Music City! One time I talked to the Nashville Convention Bureau and said please, we can work together, I would like to have NashVegas with you. They said no we don't like that name. It is stupid. I said stupid? This name is exciting! You call it Music City. Music City is as dull, boring, the name as 'motorcity'. People say I'm going to Music City, it's like 'WHO CARES???' But to say I'm going to NashVegas, it's like 'WOW!!!' Do you know what I mean? So, it's crazy. And it's kind of a miracle and just exciting, because I stood my ground, like Aaron Tippin, he sang in his song You've Got To Stand For Something. Like you! So, I own the trademark NashVegas and we have the posters, all the things you can see on the website at vivanashvegas.com or nashvegas.us or myspace.com/viva_nashvegas or myspace.com/nashvegastm. Once again you'll find all these things on my Myspace because I am my own friend many many times."

Isn't it also a recording company? 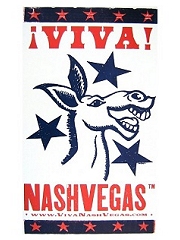 How long has been the trademark NashVegas around?

"NashVegas in 1999. Viva NashVegas like maybe 1993. It's been here a long long time. It's funny to see how time flies. And it is so funny now because one time, as I said, people said to me it is not funny. You're making fun of Nashville. That's not good. And now everybody wants NashVegas. I had an attorney today on email, this is a person who wants to make Viva NashVegas T-shirts, too. And I said that's great, show me the money! We're working on that now."

Have you been to the Czech Republic besides the airport in Prague?

"No. I would love to come to the Czech Republic. We went through Prague on the way back from Lithuania. That was the only time. I didn't have a chance to leave the airport. "

"Remember, if you have any more questions, you can always visit me even at georgehamiltonv.com or vivanashvegas.com or very simply myspace.com/georgerhamiltonv." 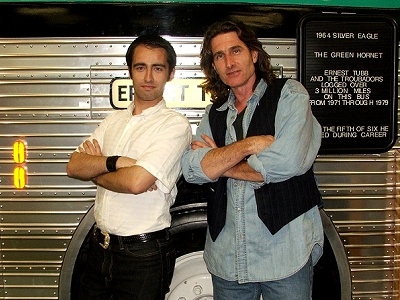