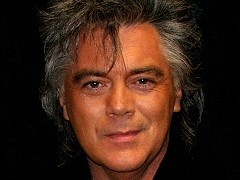 Marty Stuart is a living legend, who started out in Lester Flatts's backing group at the age of 14. In 1979 Marty joined Johnny Cash's band and soon afterwards launched his solo career. Marty scored with a number of popular hits including "Hillbilly Rock", "Hey Baby", "Tempted", Little Things" and several fan-favorite duets with Travis Tritt. I got to interview at his concert in Zurich, Switzerland.

You started playing in Lester Flatt's band at the age of 13. When did you first meet with Ricky Skaggs, who played with the same band a couple of years before you? 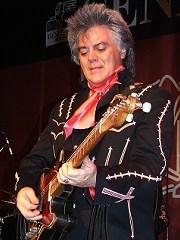 I know you enjoy collecting country music memoribilia. What are some of the most precious pieces you are extremely proud of?

"Johnny Cash's first black suit, a handwritten lyrics to Hank Williams' 'I Saw The Light' and 'The Cheatin' Heart', Patsy Cline's dress is great. It's 20,000, it's just too many to think about."

Do you keep searching for new items?

Are you shopping on eBay or such places?

"No, I don't think I've ever bough anything or sold anything on eBay."

You played a great part in the Fire Down Below movie. Would you like to try out some more acting like Dwight Yoakam does?

"I don't think I'm an actor" (laughs). "I just played music in that movie. I have a friend named Billy Bob Thorton, he's one of my favorite actors. He's a real actor, I'm not a real actor."

Do you enjoy making music videos?

"I do enjoy making music videos."

Which one of yours is your favorite?

How would you describe the importance of the Grand Ole Opry in your life? 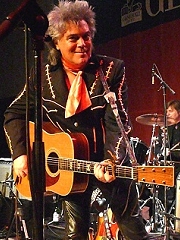 "Oh, the Grand Ole Opry is an American institution. If you're gonna play country music, this is the absolutely most important place you can be a member of. This is the most elite place in country music."

Do you think the younger artists appreciate the Opry the same way as the older generation?

Besides your own projects you have produced albums on Connie, the late Porter, Kathy Mattea. Do you have any more producing projects coming out?

"The next thing will be some Connie Smith records. We're working on songs for Connie right now. Three albums at one time. It's so hard to produce other people's music, because you have to really dedicate your entire yourself to it. So, it's easy to dedicate it to Connie Smith."

When you play in Europe, can you see any difference in the approach of the audience?
"I think they love traditional country music more than rock'n'roll country music and I think that's great."

Have you ever been to my country, the Czech Republic?

"I've never played the Czech Republic, I'd love to come."

Do you know anything about the Czech Republic?

Great, thank you very much. 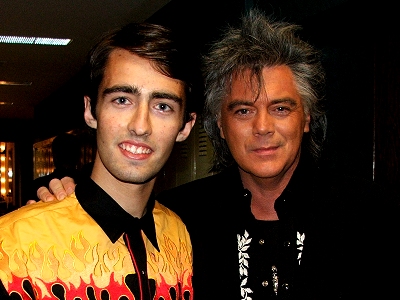