﻿﻿﻿﻿ Rodney Crowell: Vince Gill is richer, more famous, better looking and he can play. And I taught everything he knows! » CountryZone.net ﻿

Rodney Crowell: Vince Gill is richer, more famous, better looking and he can play. And I taught everything he knows! 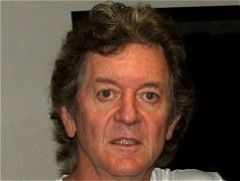 Rodney Crowell started out as a member of Emmylou Harris's Hot Band and later went on to become one of the most respected songwriters of his era. Rodney's songwriting credicts include "Stars On The Water" (G.Strait, J.Buffett), "Ain't Living Like This" (W.Jennings), "Song For The Life" (A.Jackson) and "Making Memories Of Us" (T.Byrd, K.Urban). He managed to score 5 #1 hits within 17 months as a solo artist in the late 80's and was very successful producing his wife Rosanne Cash's albums as well. The most remarkable period of his career has been the last 10 years, though, when he has released a number of higly praised albums. I met and interviewed Rodney after his show at the Station Inn in Nashville.

Your latest album, Sex And Gasoline, was your first album that was produced by somebody else. How did you feel recording an album with another producer?

"I shouldn't have produced my albums ever and from now on if there's not somebody producing it, I'm not gonna do it. It's too much work. If you're producing, you've got to pay attention, you've got to be objective. And as a performer you should just be subjective."

About 15 years ago, back in the 90's, it seemed that if an artist was selling platinum or at least gold albums, there was no point for them to make music and the labels would drop them. Has this focus on music changed for artists who haven't had radio hits lately? 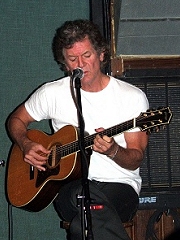 "It doesn't much affect me because I don't acknowledge it. If you have to live and die by whether or not you get played on the radio, chances are you're not gonna be in business. But if you've somehow been lucky enough to develop enough people who are interested in what you're doing, then you can continue to work. I ain't selling a lot of records anymore but I got plenty to do. I can work all I want and that's all you need."

Last week I was interviewing Vince Gill and asked him about playing fiddle in each other's music video, "Big Heart" and "What The Cowgirls Do".

"Did I play fiddle in his video? Here's the thing: He can play the fiddle and I can't, so that was more authentic. I faked playing the fiddle. And he's also a better looking woman than me." (note: a reference to the It's Hard To Kiss The Lips At Night music video) "The only thing I got on him is that I'm older than him. He's richer, more famous, a more beautiful woman and he can play the fiddle. And I taught him everything he knows!"

Is it true that Johnny Cash was mad at you because you changed the tune and melody in I Walk The Line Revisited?

"Yeah, for a while till he figured out what I was doing. He was mad for a minute. put it in a good use because he realized I just used his words and my melody. He didn't know what was going on. When he figured that out, he went out to the studio and been a competitive man, he went out there and sang really well. It kind of gave me one of those 'OK, so if it's good enough for you.'"

How did you enjoy working with Chely Wright?

"Ah, I just love Chely. She's me sister. I love her like my sister hand over my heart. She's like my sister and she's just family to me. It's a friendship that turned into happen to make a record."

I was quite surprised about the use of offensive words in some of her new songs. Did you discuss this?

"Like to use the word fuck and damn and shit?"

Yeah, it's quite unusual and maybe even more surprising to hear that from Chely.
"Yeah, it's cool. You know I encouraged her to do it. Show 'em just what they think they really know you, girl!" (laughs)

What's your most precious experience from playing in the Hot Band?

"The most precious experience? Getting to know Emmylou. Having a lifelong friend in Emmylou. She's one of the finest people in our business. Very loyal, great, great woman. And then after that a great artist and just a fantastic human being."

Where in Europe have you played so far?

Do you find anything different when playing Europe and the US?

And is there any difference in terms of reactions of the crowd?

"Since there's a language barrier the jokes don't always work because sometimes the irony is missed. But good music is pretty universal, a universal language. It feels good, they sense that the truth is involved. It generally works pretty good any way you go."

OK, thank you very much. 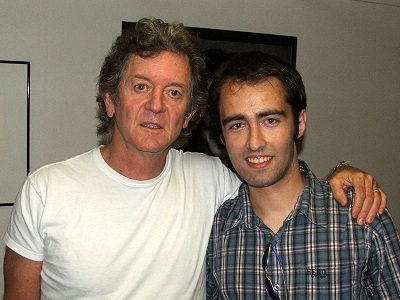 Notorious Cherry Bombs - "It's Hard To Kiss The Lips At Night"