Megan Mullins: Music Is All I'll Ever Do 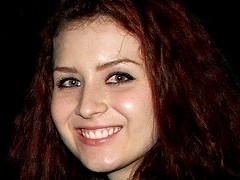 Megan Mullins is an incredibly talented young lady who tours, when she's not busy working on her promising solo career, with the legendary Randy Owen, former leader of the supergroup Alabama, along with her husband, marvelous guitar player John Bohlinger. Both Megan and John can be also often seen playing in house bands at various TV shows from Nashville Star to CMT Music Awards. I was lucky to get to see and interview Megan at her show at Judge bean's in Brentwood, TN.

So, what do you play?

"Fiddle, guitar, piano, mandolin, a little bit of viola and accordion, banjo and whatever you got."

Since what age have you been playing?

"I started classical violin lessons when I was 18 months old and I had my first performance when I was 2. And I started singing and playing country and bluegrass with my family band." 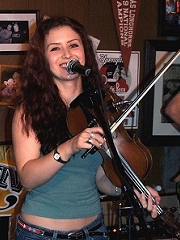 How did you get to meet your husband John?

"We were both hired to be the band on a video shoot for the artist Sherrie Austin, so we met and we started writing together and he hired me for Nashville Star to be in the house band, because he was a band leader and a music director. He just hired me to be in the band, we were out on the road and all worked out" (laughs)

What is it like to tour with Randy Owen?

"Oh, he is amazing. He's a legend and he's the nicest guy, too. He's really an inspiration to a young artist, it's like this is what you need to do. He has a fan appreciation concert every year and he invites everybody in his house, he puts out a concert, he's just the nicest guy imaginable. Yes he's so talented, he's amazing. I can't say enough good about him."

"Yeah, he'll have me do either one of my singles or Orange Blossom Special on fiddle or something. He's been really great to me."

You also tour with Shakira. What do you play with her?

"I sing and I also play violin and banjo of all things."

"Yeah, there's a song called Gypsi, so I play on that. I know, it's unexpected, but she really likes world instruments."

Your other activities include playing in all-star bands such as a house band at the recent CMT Music Awards." 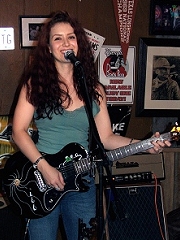 Which of these jobs do you enjoy most?

Your third single has been released. When is your debut album coming out?

"I don't know. To be determined. Stay tuned. Wish me luck!"

"Yeah, actually I just got back a week ago. I was over there and we were playing for the troops."

Where did you play in Germany?

"It was outside of Ramstein and before that when I was a kid we won as a sister city programme from in Gera, Germany. And then I came back with Shakira for the MTV Awards or whatever. I love Germany. My maternal grandparents are both from Germany."

Do you have plans to go to Europe on a solo tour?

Have you ever been to the Czech Republic?

Yes, he's my friend. Now he's in Boston studying at the Barkley University.

"Really? Wow! He taught me how to polka! When we were kids, we were at Mark O'Connor's fiddle camp together."

At the camp there also the girl that played in Nickel Creek, right?

"Yes, Sara Watkins. There was a lot of great players."

OK, thanks for the interview. 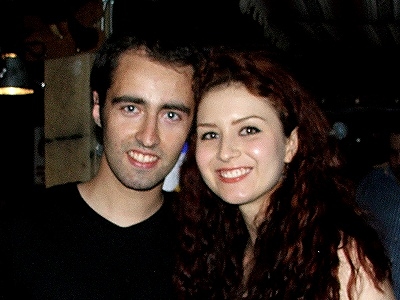 A greeting from Megan Mullins