﻿﻿﻿﻿ The Grascals: Creativity Is The Key To Success » CountryZone.net ﻿

The Grascals: Creativity Is The Key To Success 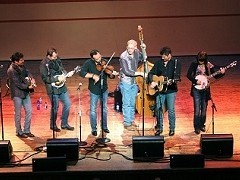 The Grascals are a bluegrass supergroup, who inconspicuously started out working with Dolly Parton and two years later earned the IBMI Entertainer of the Year trophy. The Grascals are known for their typical fresh sound and innovative bluegrass recordings of classic works such as "Viva Las Vegas", "Today I Started Loving You Again" or most lately "Last Train To Clarksville". I interviewed the band at their concert at the Ryman Auditorium in Nashville.

A couple of months ago you played in Zurich, Switzerland. Was it your first time in Europe?

Kristin: "That particular time we played in Belgium and Switzerland and before that we played in Athens, Greece. That would be the Grascals' first. We all have been there at different times but not as a band. Athens, Greece was the first show."

In two weeks you're going back to France. Do you enjoy playing Europe? What is different in Europe?

Danny: "I think that we've noticed that the crowds seem to be a little more educated sometimes about your music. When you get there, they all have your CD's, they know the words of the songs. I don't think they take it for granted like they do so much here in the States. It's easy not to really pay any attention to it, but over there they really seem to be into it a lot. A lot of fun, we enjoy it." 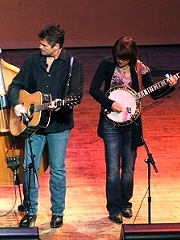 Have you been in my country, the Czech Republic?

Bluegrass is huge in both countries of former Czechoslovakia. After all dobro was actually invented over there and you may have heard of the Czech musician Radim Zenkl.

Dolly Parton had a key part early in your career. Are you still in touch with her?

Danny: "Yes, I mean we will be doing another record coming up here very soon. We're starting recording it for the Cracker Barrel. And we'll bring in a lot of friends and she's gonna do a song on there, told us what song she was gonna do. She's been a such a godsend to the group, because when you start a new band, you're trying to get it off the ground and we started a new band as Dolly Parton's band and were opening for her and stuff, so it was a really good kick off to the group. She was a big help in the beginning."

Your new album The Famous Lefty Flynn's came out a couple of months ago. What are your personal favorites on this album?

Danny: "I think for me, I like so many of them and it sort of changes. I've been listening to it this week and I really like the instrumental. We three wrote this instrumental on there and it's just hit me this week. It's just fun to listen to, it's got some different mood parts and stuff. But as far as the vocal songs, I'd probably go with 'Out Comes The Sun' right now. I think it's a pretty cool tune, I like it a lot."

Kristin: "I think my favorite is 'Give Me Jesus', which is a last song. I just like it because it's really simple and sparse and Jamie sings it in. I really like the way it turned out."

Jeremy: "I'd like to go with 'My Old Friend The Blues'. I really like that tune. Terry Eldredge sang the lead on it and just did a great job." 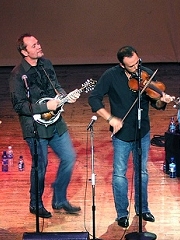 My current favorite is 'Blue Rock Slide'. How do you write music like this? Do you just jam and see what happens?

Danny: "Well, actually I had written a good portion of that tune. I was just sitting on the bus playing and then Jeremy started kind of playing with me and said 'what is that?'. I said 'something I've been writing'. He was like 'oh that's cool'. So we messed with it he said 'I think it needs another part', so we got Kristin and she sat down with us and she kind of came up with the different part. We put it together, so we all three kind of wrote it together and I think it turned out really well."

Have you written a lot of music like this?

Danny: "No, we haven't. We need to do more of it. I think we're lazy sometimes, sleepy, just picking on the bus." (laughs)

You've just shot a brand new video for the Last Train. Do you enjoy making music videos and how do you feel about the new one?

Danny: "Oh yeah, they're a lot of fun to do. This one was kind of hard. It was really hot when we did it and we were trying not to look like we're hot. But it was fun doing it, it's gonna a very fun video of 'Last Train To Clarksville'. I think everybody will enjoy seeing. It's always great to be able to have something like that because more people know you more, know your face, know your name. So we're just very happy to be getting our second video out."

There's also Hank Jr. on the new album. What is it like to work with a legend like Hank?

Kristin: "We actually are coming off tour with him. We just did 6 or 7 weeks opening for him on his Rowdy Friends Tour and we're going for another run in October. It's great! It's never a dull moment. That song on the record, 'I'm Blue And Lonesome', is a special song, kind of appropriate for him to sing that because his dad and Bill Monroe wrote it right here at the Ryman backstage. We kind of merged country and bluegrass jsut a little bit, it still sounds bluegrass. We did have steel guitar and light percussion on that. We thought it was a perfect song to bring him in. He did a great job."

Well, to be honest, before I heard the new album, I really thought that Kristin was a new lead singer, becuase on all posters, all photos she's up front...

Kristin: "That was far from the truth! I never sing!" (laughs) 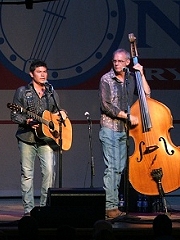 With you and Jeremy being the new members, do you think that the sound of the Grascals changed?

Jeremy: "Yeah, I think anytime you switch members the music's gonna change some because different people have different styles. I think Kristin and I collectively invented our spin on the music a little bit and I think everybody likes it."

Kristin: "Yes, it's always gonna change I think. And in this band they let it change. That's not that they wanted us to sound exactly like the guys that came before us. I think that's the best way."

Jeremy: "The key is to be able to be creative, because if you try to play note from note, someone else's stuff, it's really hard to express yourself through someone else, because you're playing the way they play and not the way you play."

Danny: "I think having them just freshened the sound overally. It's just with the difference in each of them. I feel like each of these guys is definitely a little bit more on the progressive side than what the other two guys were. And it's added just a little bit of that spark to it. That's not like we're starting to playing progressive music. It's just kind of added a little bit of newness in there. It's nice for me, I enjoy it."

Did your fans accept the change alright?

Danny: "Everybody loves Kristin. And of course, she's the IBMI banjo player of the year, that's why we hired her. No, I'm just kidding." (laughs) "And Jeremy, when he plays too, it's just so stinkin' good. People just love it. He's got, I think, one of the best bowing that I've seen in anybody. I love watching him play. I told him on stage not too long ago he looks like that the instrument says like you're gonna do what I want you to do and you might as well get in. And that's cool, because like me, I feel like I'm wrestling a lot of times. And Jimmy, our last fiddle player I grew up with, sometimes he looked like he was ready just fight that fiddle and it was to fight back, but Jeremy's got this control thing that makes me aggravated sometimes."

You recorded a duet with Joe Diffie on his new upcoming bluegrass album. How did you enjoy working with Joe? 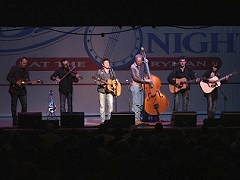 Danny: "Joe's a great guy. We used to work together at the Gibson Guitar company many years ago before he ever had his first record deal. He's a great guy, a great writer, a great singer. We had a good time in the studio with him cutting the song and hopefully it fits in the record well. I think most of the other players on there and everybody else on there is pretty much the same I believe."

Kristin: "We did that fast if you remember. You and I both when 'what?', because we played through it and didn't do any fixes or anything. Joe's guys said 'OK, that's great, thanks'. And we were like 'wow, we need to listen to that and fix it!' So we did it really fast. I'm sure that made it sound great."

How do you kill time between shows?

Danny: "Lots of the time sleeping, but I don't sleep a lot, so I watch a lot of movies. We pick sometimes, at bluegrass festivals we have a lot of friends and stuff, so you visit and go around and talk to folks who come to visit with you on the bus."

Kristin: "I read and I watch DVD's and sleep."

Jeremy: "Jamie and I just about every day we go running. We run every morning and come back and grab something to eat and make coffee. But usually the first thing in the morning that I do, because I'm the main coffee drinker, I make my coffee."

My last question, a couple of years ago you happened to be pictured on chilli cans. Did it make chilli the most popular food in the band?

Kristin: "We have a rule that we don't allow to eat chilli." (laughs)

Danny: "That's when we were working with the Mayberry's Finest people and Vietti and we had a sponsorship with them, wrote a jingle for them and stuff. Now we got Mobil Delvac that we're working with, they sponsor our bus and everything, they're really good folks."

Thank you very much. 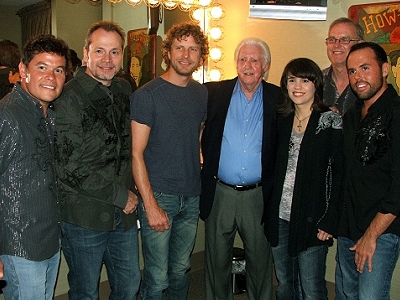 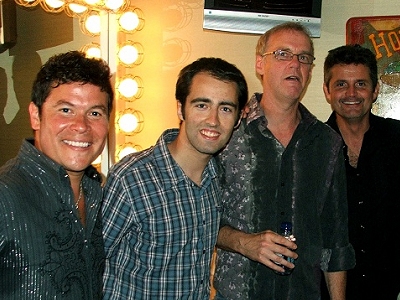 The Grascals - "Last Train To Clarksville"