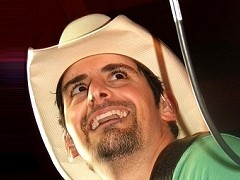 Seeing Brad Paisley in concert was a dream of mine for years, which eventually came true when I got to Louisville, KY, where Brad played with opening acts Jewel, Chuck Wicks and Julianne Hough at the Kentucky State Fair. Brad Paisley is well-known for playing pranks on his peers. The show in Kentucky was in exception. It was the first show for Chuck Wicks to have his brand new trucks and trailers with his portraits all over them and Brad and his guys used black sticky tape to make decorate him with beautiful mustaches and beards.

I had the best seat I've ever had at a major concert. It was right below the long ramp which was running from the center of the stage in the audience. When at artist was singing on the ramp, they were right above my head. Thanks to this closeness I could see details I'd rather miss, such as Jewel's unshaved legs, Julianne Hough's black underwear and Chuck Wicks' shoes which might have been older than him. 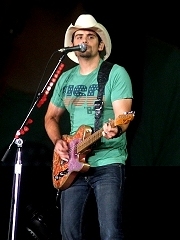 The technical side of Paisley's show was perfect. Huge screens all over the stage projected various visualisations and effects, which made every single song different and something new was going on at all times, i.e. during "Ticks" there were scenes of a meadow from a tick's perspective, during "Online" the screens turned into a giant Matrix screensaver, for "Mr. Policeman" there was an insane police chase in the virtual world and for "Celebrity" there side screens showing funny videos of Bill Anderson and Little Jimmy Dickens. Brad was absolutely fantastic, he was running all over the stage and the ramp back and forth and was playing and singing hard. Many of the instrumental solos and some acoustic songs were played right above me. When he was playing "When I Get Where I'm Going" above my heard, I could only raise my hand to touch his knees. Then I remembered those crazy girls trying to grab Garth Brooks's legs in his early TV shows and was telling myself calm down, don't touch him, you got your meet & greet, you'll shake hands with him afterwards. So at least I took advantage of the immediateness to take a close up shot of his shoe (via the macro regime). Brad also celebrated the people of Kentucky of playing an acoustic song "I Can Hear Kentucky Call My Name". In order to liven up the show, he also played several duets - one with Jewel (the Hag's classic "That's The Way Love Goes"), and two virtual duets - "Whiskey Lullaby" with Alison Krass, while Alison was shown on the big screen and a brand new tune "Let's The Good Times Roll" with B.B.King from the upcoming album Play. What was rather surprising was Brad didn't play the current single, the lost-and-found hit "Waitin' On A Woman".

After the show I went backstage to meet Brad. Even though I was a fanclub member and officially applied for a meet & greet at this show, I wasn't selected and eventually got my last minute pass with a little help from my friends at CMA. As I learned from Brad's road manager later, there are several hundred meet & greet reguests for each show and they are able to accept only 80 fans. Organisation of the meet & greet w 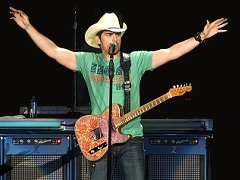 as highly professional. To save time, Brad didn't sign anything and everyone got a signed photo of Brad as they were leaving the backstage area. Personal cameras weren't allowed, all photos were taken by a professional photographer and could be downloaded from Brad website later. For some shows, they also had high resolution prints that were available for purchase online, but unfortunately not for the show in Louisville I attended. After my experiences with very brief meet & greet with Terri Clark and George Jones (shake hands! photo! next!) I was very surprised how much time Brad devoted to each and every fan, even though there was 80 people in line and no matter how tired he must have been. Brad was very kind, friendly and was asking me many questions as well. I told him that Sally, the bartender from the green room at the Grand Ole Opry, where I was the previous night, says hello to him and Brad joked that I was lucky to get there, because he isn't allowed backstage to the Opry. When I asked him whether he was planning to tour Europe, he replied that first there must be a way more hardcore fans like me (thus I'm happy that two years later there actually was enough fans as Brad played his first ever show in London, England on 6/23/2010). Even though he hadn't played in Europe up to date, he said he had been in Italy, England and Ireland on holidays. He also asked me what the capital of the Czech Republic was and how far my country was from Georgia, where the Georgia-Russia war conflict was taking place at the time. The meeting with Brad was very relaxed and the photographer didn't tell us to pose for the photo until we were still talking. When I was leaving backstage with the signed picture, I met Chuck Wicks and Julianne Hough eating pizza in the hallways, so I took pictures with them as well.

Brad's show was a fantastic experience and I hope he will start touring Europe on a regular basis. 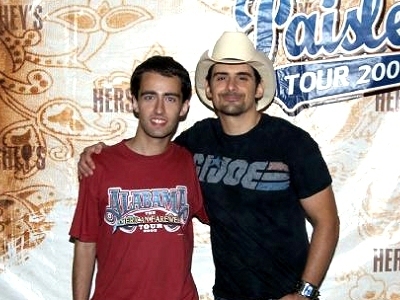