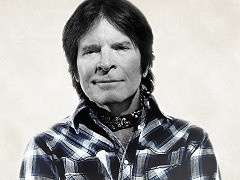 John Fogerty paid special attention to arrangement and for instance "Proud Mary" featuring Jenifer Hudson now almost sounds like cajun while Alan Jackson's "Have You Ever Seen The Rain" with fiddle makes you feel you hear a brand new country song.

01 Fortunate Son (with Foo Fighters)
02 Almost Saturday Night (with Keith Urban)
03 Lodi (with Shane and Tyler Fogerty)
04 Mystic Highway
05 Wrote a Song for Everyone (with Miranda Lambert feat. Tom Morello)
06 Bad Moon Rising (with Zac Brown Band)
07 Long As I Can See the Light (with My Morning Jacket)
08 Born On the Bayou (with Kid Rock)
09 Train of Fools
10 Someday Never Comes (with Dawes)
11 Who'll Stop the Rain (with Bob Seger)
12 Hot Rod Heart (with Brad Paisley)
13 Have You Ever Seen the Rain (with Alan Jackson
14 Proud Mary (with Jennifer Hudson feat. Allen Toussaint and Rebirth Brass Band)