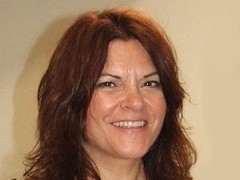 Rosanne Cash was one of the most successful female artists of the 80's, scoring a total of 11 #1 hits. She was headlining the Porta Festival in the Czech Republic, where I interviewed her about her memories of her first visit to Prague in 1978, current projects, future plans as well as her last memories of her late father, the legendary Man in Black.

What can you remember about your visit to Prague with your dad in 1978?

"It's been one of the most beautiful places I've ever been in my life and I always wanted to come back. Coming back is a dream fulfilled for me. That tour was very early in my career and I was just starting out. I didn't even have a record deal then. I always thought I'd come back on my own someday after I'd been doing this for a while but it took 30 years. I remember very clearly that we had a bus and we stopped at the town square. My father got out and a thousand people just came and rushed up to him to speak to him. It was just a beautiful moment. They loved him, he loved them back." 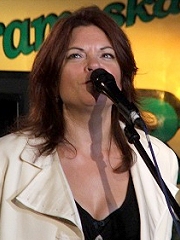 You don't like your music to be categorized in any specific music style. How would you characterize your music?

"I think it's a blend of roots music, rock, even a little bit of jazz and r&b thrown in. It's definitely a blend based on roots music. American roots music."

Where do you find an inspiration when you write a song?

"Everywhere, not television. I'm always open to finding an inspiration. I was inspired tonight. Tonight's show was very inspirating me."

How do you actually write a song? Do you write a lyric first or does it happen that you have a tune and you're searching for the right words?

"The best way is when they come together. The lyric and the melody when it happens at the same time. I'm playing guitar and it starts to come. A lot of times I write a lyric first."

What makes Black Cadillac different from your previous albums?

"Well, the record was inspired by losing a lot of people in a short period of time. I lost three parents in two years. The songs arose out of a lot of grief but once I started writing them I started to realize that loss is not just about grief. It's also about negotiating the relationships and a strange kind of liberation and a new kind of awareness of your place in the world and also a discovery of my own personal ancestry and musical ancestry. So this record really as well as about those things musically covers everything that I am about musically. It's a pretty broad-spectrum musically and it's very true to who I am."

Did the film-makers of the Walk the Line film co-operate with the Cash family in any way?

"My father put the film in motion before he died, so we signed off on it. He never saw the final script. We weren't really involved in that. My brother had some involvement. But my brother's involvement was mainly limited to asking them to remove certain scenes that were just too painful for the rest of family."

No matter what people think of the film, it has raised great desire for your father's music. As you know, many new CD's and collections are coming out these days. What of these new releases do you consider as the most remarkable? 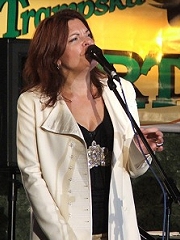 "Obviously the ones that Rick Rubin has put out. On Earth and then the new one that just came out is fantastic. And I think that the Sony Legend Box Set is also really good."

What song of your father's is very special to you?

"Big River. I love it very much. I think it's a great piece of poetry."

What memories and feelings do you have about your last duet with your dad "September When It Comes"?

"It's very special to me. It's like the ultimate family photograph. It's just very personal to me, like something that I can give my grandchildren eventually. It holds a very dear place in my heart."

When you consider your current activities, do you feel to be more a singer or a writer right now?

Are your working on a new book these days?

Are there any contemporary country artists that you notice and you like in recent years?

"Sure, I've been listening to Josh Ritter lately. I guess you can call him more folk than country. And, Steve Earle is a friend of mine, I love Lucinda. I listen to more folk than what you would consider commercial country. In New York we don't have a country music radio station, so you have to pick and choose yourself, you don't just hear it on the airwaves. I'm drawn to songwriters basically, good songwriters like Emmylou Harris. The record that she did with Mark Knopfler I think it's great."

Do you plan any other tour outside of the US this year?

"Well, I already played Dublin, Edinborough, London, I'm playing Paris on Sunday. And I'm going to Australia at the end of the year." 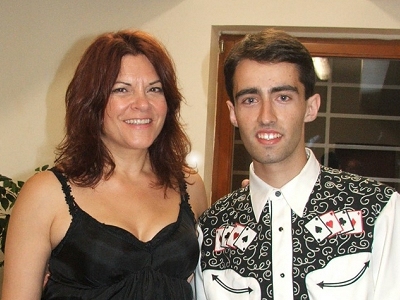