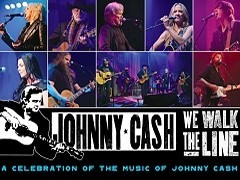 A special tribute show to commemorate the 80th birthday on the late Man in Black, which was held in Austin this April, has been finally released on CD/DVD. A bunch of Cash's old pals and admirers including Willie Nelson, Kris Kristofferson, Ronnie Dunn, Sheryl Crow, Shelby Lynne and Jamey Johnson paid tribute to the legend. Many performances were presented in very unique arrangements.

One of the many highlights was "The Highwayman", where the original performers Willie Nelson and Kris Kristofferson were joined by Shooter Jennings for Waylon's part and Jamey Johnson for Johnny's part.

Here's the tracklist of "We Walk The Line: A Celebration of the Music of Johnny Cash":

A sample from the "We Walk The Line" concert