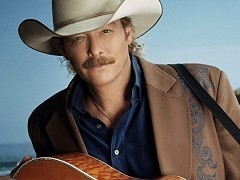 Alan Jackson released a second single and music video "So You Don't Have To Love Me Anymore" from his upcoming album. He took off some time after he parted ways with the Arista Records, a 20-year collaboration which made him a living legend. A few months later he signed a new record deal with EMI Music and started working on a new record. The first single off the record was an amazing summer smash hit "A Long Way To Go" and the tune is as cool as the first one. Both super songs will be featured on the new album which will be released later this year.

The new song "So You Don't Have To Love Me Anymore" was written by Alan's nephew Adam Wright and Jay Knowles. Fans immediately started comparing the song to George Jones' "He Stopped Loving Her Today". Jackson responded that since he hadn't writted the song himself, it's OK for him to talk about it. "I would never put one of my songs up against that one, but since I didn't write it, it's OK," he said.