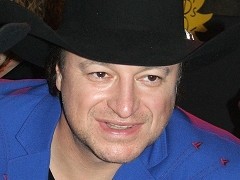 Mark Chesnutt is a genuine treasure in country music and became a superstar right after his amazing debut in 1990. Early in his career he was called ""Human Jukebox" as he knew thousands of songs by heart. He scored 14 NO1 hits during his first 10 years and Billboard declared him as one of ten most played artists of 90's. His smash hit "It's A Little To Late" became the most played song for the EMI Publishing Company between 1995-2000. I met and interviewed Mark when he was a guest at the German Country Award in Erfurt, Germany.

Back in the early 90's you were called 'The Human Jukebox'. Is it still true?

"Yeah, I guess so. I still remember all of those songs. They probably called me that because I was a young guy at the time I was only 26 and I knew tons of old country songs. I guess they were impressed by that. But now I am 41 years old and so there's some other guys that come up younger than me that know just many of those songs. There's not a whole a lot of people that know as many songs as I do because I played so long in honky tonks and I mainly sang old country songs and nothing new, so 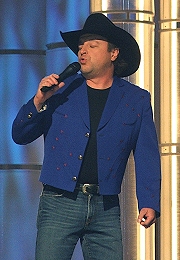 I knew all of that old stuff."

For all over the years you still live in Texas. But what about Nashville? How often do you go there?

Your new album's called 'Savin' The Honky Tonk'. Do you think the honky tonk is dying?

"Some places I think that honky tonks are disappearing but not in Texas. Texas is built for honky tonk. Some places that we used to play in very big honky tonks that aren't there any more in different parts of country"

What do you think about Big & Rich's music?

"I don't really know much about it but I only heard the 'Save A Horse (Ride A Cowboy)' stuff and their new single. I don't know. I'm not really crazy about it, the rap stuff I can tell you that."

Haven't you ever felt any need to rap in your music?

"To rap? No! I've never had the desire for that." (laugh) "I think it's funny, yes, but I don't really care for but if that's what they wanna do. Good luck to them!"

Where does the last track 'Honky Tonk Heroes' come from? It seems to be very old.

"Yeah, that's old. Billy Joe Shaver wrote that song and Waylon Jennings recorded in the 70's. And I just thought that would be a cool way to do it on album just a little bit acoustic and to make it sound like an old record. This is first time I've ever played guitar on my record." 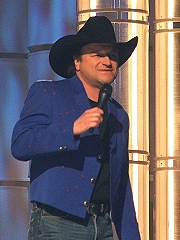 How old are they?

Do you take your family with you on tours?

"No, they don't go with me because they would destroy the bus, they would keep me up all night and so they stay home and do the normal life thing."

What tour do you consider as the most memorable one? What tour did you enjoy most?

"My favorite tour was the tour I did in the beginning of my career with George Jones and Conway Twitty. And that was the biggest thrill for me to open up for those guys every night and I got to watch them work every night and I actually got paid for that. I couldn't believe it, I had the best time. I learnt a lot."

If I remember well you did some opening acts for Alan Jackson, right?

What do you think of his music?

"I like Alan Jackson's music. He keeps it country. One of the few that can do that and get away with it."

Do you stay in touch with Tracy Byrd?

"Every now and then. We talk and not a whole lot we only live about 15 miles apart and our schedules don't let us to hang out a lot."

Many of your fellow artists have released a holiday album. Do you plan any?

"We set out to do that a few years ago but it didn't work out. I did record some Chri 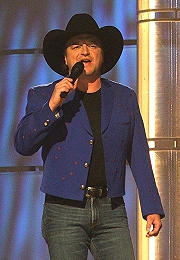 stmas songs that came out on compilation albums. But I don't have any plans for a Christmas album yet."

"Yeah, it's OK. It's expensive. I liked it a lot better when I was a kid but now I am a daddy it's not such a big deal. It's little depressing, you know." (laughs)

Have you ever worked in Christmas time?

"Well, I work as much as I can and there have been times when I worked right up until Christmas Eve. I like to take it, I like to be off."

Do you plan to record any live album or DVD?

"We started to do that too a few years back. But then I was signed to my current record deal and that was put on the shelf. I was going to do that on my own. We have recorded a lot of shows in a few years so it's still a possibility to do a live album sometimes."

Until today, have you ever performed in Europe?

"Yeah, I've played. I've been in Switzerland twice in Gstaad. And I played all over Germany a few years ago and once in England."

And do you plan any European tour in the future?

"Yeah, we're workin' on one. We had an opportunity to come this year but I don't think it'll work out. Maybe later on, in a near future."

OK, that's all. Thank you very much. 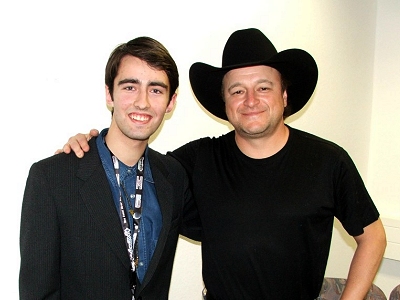 A greeting from Mark Chesnutt