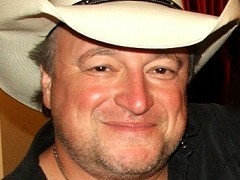 Mark Chesnut made history when he released a first-ever country music album exclusively on Blu-Ray. He and his band recorded 15 of his greatest hits such as "Too Cold At Home", "Almost Goodbye", "Going Through The Big D" and "It's A Little Too Late" using 3D cameras. The disc enables listeners to switch cameras and watch the show from different angles. A musical track is also featured to be transfered onto portable devices. The project is titled "Your Room" and the basic idea is to create an impression that Mark Chesnutt is playing directly in your own living room!

Releasing a music album on Blu-Ray is quite a brave experiment, because many households still don't have required equipment to play the record. On the other hand, due to an extensive number of traditional country music fans it is highly probable that many people will buy their very first Blu-Ray player just to play Mark Chesnutt's concert. A sample from "Your Room"