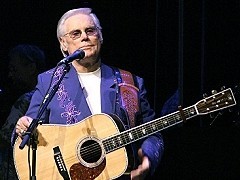 The guest list for George Jones' final show keeps growing. The 82-year-old legend, who announced retirement after a farewell tour this fall, will sing to his fans for the last time in Nashville on November 22. Previously announced guests include Tanya Tucker, Randy Travis, Jamey Johnson, Charlie Daniels, Lorrie Morgan and Gene Watson. This week Jones called Mark Chesnutt and personally invited him to join the cast of special guests for the final concert.

Mark Chesnutt comes from George Jones' hometown of Beaumont, TX and the legend has been a mentor of his carreer since the very beginning. Jones even wrote liner notes for Chesnutt's debut album Too Cold At Home in 1990.

Through the years the two have recorded a number of duets and remained friends. When I interviewed Mark a few years back and asked him how he felt about the fact that young artists approached him to tell him he was their hero, he compared this feeling to his relationship with George Jones: "I like when singers who are having hit records now come up to me, the younger singers, and tell me that they grew up listening to my music and I was an influence on them. That makes me feel like an old man at the same time but it makes me feel like I've done something. I love and appreciate that because I'm a huge fan. I still start shaking when I'm around George Jones and I've known him for over 20 years. I still get around him and I can't talk, I stutter, and when I see a kid come up to me that way, I really enjoy that. That makes me realize like I really have done something. And I always try to make them relax like George has always done for me." (full interview here)

On November 22 Mark Chesnutt and George Jones will perform together for the last time at the Bridgestone Arena in Nashville.

George Jones & Mark Chesnutt - "Good Ones And Bad Ones"