﻿﻿﻿﻿ Mark Chesnutt: You Never Know When Your Career's Gonna Be Over » CountryZone.net ﻿

Mark Chesnutt: You Never Know When Your Career's Gonna Be Over 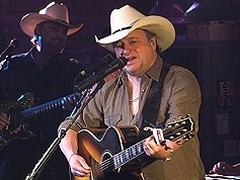 During my Texas trip I took an exciting ride when I got on Mark Chesnutt's touring bus and went with him and the gang to do a show down in Brownsville. It was really cool to experience a life on the road with a major star for 24 hours including spending a night on the bus, checking in the hotel and then watching the rehearsal and the show. Mark's album Rollin' With The Flow just came out a few months before, so I interviewed him about his current and future plans.

You released an album earlier this year. Would you like to make a music video for any of the songs?

"Yeah, we're talking about it. I don't know for sure if we'll do it. We kind of like wait and see if the record will get played before we spend money on video. It's not as important as it used to be. It's not as important for an older act as it is for a younger act. I will make one if they want me to, but I'm not really big on making videos."

Do you mean the song 'Come On In'?

Do you have any ideas for the video? 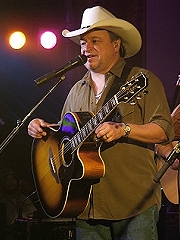 "Yeah, we're thinking about it if we do it, to bring a bunch of guests in, you know, some of my friends, stars, maybe Willie Nelson, maybe Hank Jr., some of the guys like that, some of the older guys, a few of the newer guys, don't know for sure. Just be kicking the idea around, but it would be a big video, it'd be a lot fun. If I'm gonna do a video, I'd like to do that one."

What is your favorite music video of yours?

"Of mine? Oh, 'Too Cold at Home'. That's my favorite because that was shot around my hometown, Beaumont, TX, and all those people in there are friends and family dancing around and all that stuff. I'm driving my old truck I had back then."

Yeah, and you showed a little acting as well.

"Well, well, not much, just a little. Sitting at a bar, little driving, that's not much of an acting for me." (laughs)

What are the highlights on the new album?

"'The Whiskey's Fine' is, of course, one of my favorite songs on that. The CD is full of highlights, they are all great songs. I think they sound better than anything I've ever done, because we took our time, we had a long time to work on it. Two years took to make this album. And we had some great songs, there's the Keith Whitley song that he write with Hank Cochran right before he died and it was never recorded til I did it, so that's a big thrill for me. And of course the song 'If The Devil Brought You Roses' was written by Tony Stampley, that song was written in the late 80's, early 90's for Hank Williams Jr and he never recorded it. So, that's my kind of music that I'm glad to have on the album."

"Yeah, 'A Long Way To Go', I wrote that one with Roger Springer. It's about me growing up in Beaumont, pretty much it tells my story."

Is it a true story? Did you actually talk to Waylon back then?

"I didn't meet Waylon until later on, after my career started. We had to make it sound more interesting like that I met him when I was a teenager. But he did tell me that. He had a long way to go and stuff about him I didn't really want to know and things like that." 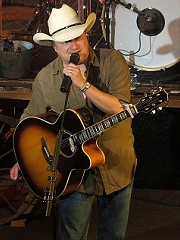 think it's a high time to put out the Greatest Hits, Volume 2?

"I think it is, you know, the MCA put out the first Greatest Hits and after I left the label, they put out the 20th Century Masters, another greatest hits. Yeah, I would like to see kind of like a bigger selection, maybe like a two disc box of all my songs over the years, because I recorded a whole load of stuff that weren't even singles that I'd like people to hear."

And maybe a DVD with the music videos?

A couple of years ago you a cut a duet with Tracy Byrd on his album. Would you like to cut another duet with him to put it on your album?

"Well, I'll tell you what I'd like to do. I'll be glad to cut another song with Tracy but I'll tell you my main goal right now is in one of these days to record a duet with Hank Williams Jr. Because I've recorded with George Jones a couple of times, Waylon Jennings, and I would like to do a song with Hank Jr."

Have you decided what song to cut?

"We even talked about doing a duet on his album. If we record it, that would be a completely new song, something like 'If The Devil Brought You Roses', that kind of song."

George Jones put out an album of unreleased duets and there is one with you called When The Grass Grows Over You. Are there any more duets you recorded but never got released?

"I don't think there is, pretty much they released all of them now. The one of this CD was the second song I did for the Bradley Barn Sessions. We cut two songs and they picked the one for that album. My favorite duet that I've ever done was with Lee Ann Womack. I think that was a great record. I wished it was a single, but that was my favorite duet that I've ever done and she came in and sang harmonies with me on one of mine, a couple of albums ago, Savin' The Honky Tonk. We did that Keith Whitley song 'Would Your Arms Be In This Way'. That's my favorite, but it's not a duet."

Would you like to cut a duet with another female singer? 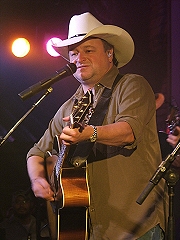 "We've talked about that for years and we just haven't done it yet. We've been recording our shows for the last 18 years, there's a lot of stuff we have recorded. We're thinking about putting an album together, but the label, the lofton Creek would have to want to do that, too. I don't know how well that would go. If we did it, it might be better to do it on the Billy Bob's label first to see how it sells. But yeah, we're talking about it, possibly."

"I just remembered another duet that never came out. That was the theme song for the Rockin' The Roadhouse Down with Joe Diffie and Tracy Lawrence.

"Yeah, that was done just for the tour."

But the song's so huge, it should come out someday.

"Yeah, it was pretty good, but it's a little late for that now. We're not touring anymore."

How about your boys? Do they play?

Waylon told me he was just about to start a rock band.

"Yeah, well, he wants to. He's really getting in guitar real good. He's learning, he's taking lessons. He's more into rock'n'roll right now. And he's a great drummer. He's been playing since he was about three, so he really is a good drummer. My middle boy, Casey, he plays the piano real well. He likes country music and he likes Billy Joel and stuff like that, kind of piano music. So, he's really getting in that and he tries writing songs. And Cameron, my youngest son, he's learning guitar also right now. He's doing real good and he likes to sing. They all three are musicians."

Do you think that some of them might join your band?

"Well, they probably won't want to do that. They're more into their own kind of music. I want them to finish school and go to college. And I prefer them to find another career and do music on aside, because music is not a real and steady job. You never know when your career's gonna be over. It's very hard to sustain career, to keep making living of it."

Are you OK with fans who approach you in public places? 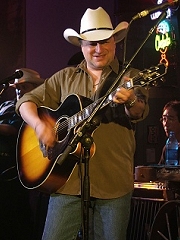 have problem with that. It makes you feel like you've done something. Especially when young people come up and tell you they've been listening. I'll tell you what I like more now, even when singers who are having hit records now come up to me, the younger singers, and tell me that they grew up listening to my music and I was an influence on them. That makes me feel like an old man at the same time but it makes me feel like I've done something that I love and appreciate because I'm a huge fan. I still start shaking when I'm around George Jones and I've known him for over 20 years. I still get around him and I can't talk, I stutter, and when I see a kid come up to me that way, I really enjoy that. That makes me realize like I've done something, that I really have done something. And I always try to make them relax like George has always done for me."

Do you sometimes go online to check your website and myspace to read comments and messages from fans?

"Every now and then I do that. Yeah, I get a kick out of that, that's really funny."

Do you sometimes respond?

"Well, I don't do it myself, but I tell them what to respond. I'm kind of ignorant to computer, I'm not really good at that stuff, much old-fashioned."

How about another tour to Europe?

Is there any difference in the approach of the audience in the way they appreciate country music in the USA and Europe?

"Yeah, pretty much the same way. You really can't tell where you're at. If you closed your eyes and you didn't know where you were, you wouldn't know, because the crowds are always really good. Their responses are loud and they really like to drink and party and have a good time. That's always been my favorite thing. When there's a big party going on, I'd like to be the music."

Thanks for the interview.