﻿﻿﻿﻿ Sammy Kershaw And Joe Diffie Having Fun On Tour » CountryZone.net ﻿

Sammy Kershaw And Joe Diffie Having Fun On Tour 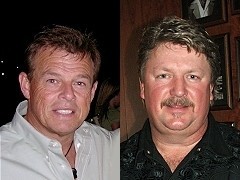 Country artists are known for playing various pranks on each other when they tour together, but you don't have to necessarily be a newcomer to experience this. Even country music veterans with successful careers spanning 20+ years enjoy teasing each other on the road. Joe Diffie, Sammy Kershaw and Aaron Tippin are just wrapping up another leg of their "Roots & Boots" tour, where Joe and Sammy played a series of some hilarious pranks on each other. Sammy stroke back with a picture of "Joe's bus" that reads "I love Elton" and has a Sammy Kershaw license plate. "Today my friend Joe Diffie posted a picture of my new bus on facebook. I truly believe he was jealous. So, he went out a few hours later and bought a new bus for himself. I thought I would share a picture with you folks of his new bus because I know he is very proud of it. I really love the front license plate. Thank you Joe. Y'all show Joe some love and give him some at a boys", said Sammy. Then the jokes went on...

Sammy Kershaw: "Mr. Diffie has laid out his wardrobe for tonight. He heard Sir Elton maybe coming to the show." Sammy Kershaw: "Little Joe peep wanted me to tell y'all good morning. He's having trouble with the batteries on his bus today." How great it is to see when two of the greatest country singers around still enjoy doing the road!