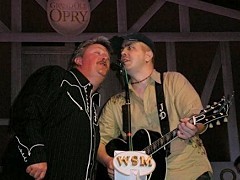 The powerful duet by the reigning European Artist of the Year, Peter & The Rowers, and country music superstar Joe Diffie has reached #1 at the ECMA Top 100 this week. This becomes the third #1 hit within 18 months for the successful Slovak band, whose hit records "I'm Leavin'" and Blind Horses" topped European country charts in 2007. The collaboration with Peter & The Rowers also turned into an impressive comeback for Joe Diffie, who has already had incredible 12 #1 hits under his belt buckle in the USA. In addition to the success of "Long Gone Loner", European radio stations started playing Diffie's earlier hits and "Third Rock From The Sun" even reached Top 10 in several countries.

Peter Dula, who is the lead singer of Peter & The Rowers, made his debut performance on the Grand Ole Opry, when he joined Joe Diffie on stage during the CMA Music Festival on June 5th, 2008.