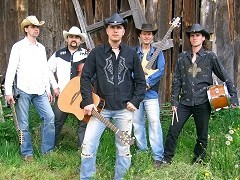 The upcoming Peter & The Rowers album will feature the total of three duets with special star guests. One of them is the honky tonk legend Joe Diffie, who is going to help out Peter Dula with the original "Lone Gone Loner". The great Buddy Jewell, the very first Nashville Star winner, will also lend his vocals to the project. The list of star guests concludes with the best Czech country artist Petr Kocman, who will collaborate with Peter on "Lonesome Ride". The long-anticipated album "Honky Tonk Dream" is coming out this spring.

2007 turned to be a great year for Peter & The Rowers. Their hits "Blind Horses" and "I'm Leavin'" went straight to #1 at the ECMA chart and the latter even broke the airplay record when the song spent consecutive 14 weeks at the top. Both these songs have been nominated for the Song of the Year by the European Country Music Association and Peter & The Rowers are about to compete with fellow nominee giants such as George Strait, Alan Jackson and Kenny Chesney. Considering that not all of the categories have been announced, some more possible nominations for Peter & The Rowers are not out of the question.