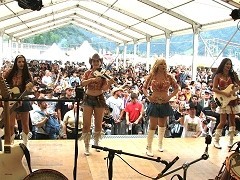 The Country Sisters have become a Youtube hit this year and one of their videos from the Trucker Festival in Interlaken from 2009 has been viewed by more than 4,5 milion people by now. Today you'll find what the girls have to say about the video as well as all those spicy comments on Youtube!

How do you feel about the incredible success on Youtube? There's more than 4 million views so far...

Sonia: "It's unbelievable, that's true! We wouldn't have believed that..."

Claire: "It's really remarkable considering the fact it's one of the not-so-good videos of ours. Especially it makes Alena very happy, because if you read the comments below the video, many of them are really juicy..." (laughs)

Sonia: "Everybody praises her fake boobs, which must make her really proud of her natural breasts..." (laughs) Claire: "That's right. But it's also because of the song, because it's 'Cotton Eyed Joe'. That's such a smash hit, everybody's searching this one."

Sonia: "It would be great if all our videos were that popular...'"

Claire: "And especially the ones we are actually much prouder of than 'Cotton Eyed Joe'..."

Alice: "I think Alena is the one who should comment on this video..."

Alena: "Well, I'm actually not very proud of it. Considering the fact that anybody can upload a video on Youtube, which they shoot with they mobile phones or cameras right in front of the speakers and the sound turns out really terrible. If the video had been taped by someone with a professional camera, the sound would have been much much better. So we know that the sound isn't very good, but I still think that most people view the video just because we are jumping and our breasts are jumping in there..."

Alice: "Yes! That your fake boobs are jumping!"

Alena: "That's right. Everybody comments on my breast implants and the fact is I have natural ones!" (laughs)

Alice: "On the other hand, Rednex's music is quite typical for us. It features the show as well as country."

Alena: "But what's amazing is that we have more views than original Rednex! If they were also jumping and they were women, they would be successful like us!" (laughs)

Alice: "Yes, they should get themselves breast implants, too!" (laughs) Do you think that the high number of views might get you to parts of the world you haven't played before?

Sonia: "That's quite possible. People from all around the world send us invitations to come to play in their country. We have invitations to play in exotic countries ten times or twenty times, but unfortunately it usually ends up like one solid tour the every other year.

Claire: "Some of the fans react even in a surprised way like 'Why don't you ever come to England?'"

Sonia: "Or why don't you come to Texas? We are waiting for you! Why don't you tour in America?"

Claire: "We always try to explain that first we need a good manager and some good offers and then we will be glad to come."

Sonia: "Get us a good manager and we'll come!"

Claire: "If you want to see us somewhere, get us somebody who can take us there!"

Sonia: "Either a manager, organizer or promoter."

Soon we'll get a halfway through this series of interviews. As many of you know, a number of past Country Sisters members live in various parts of the world. How many girls have fallen in love and got married in places where they just played with the band will be the topic for tomorrow!