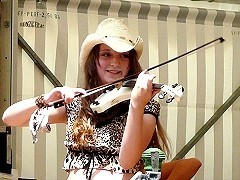 In the last part of the interview before Christmas we'll focus on the youngest member of the Country Sisters, fiddle player Maggie, who is quite shy and not as talkative as her older colleagues. So today you'll get to know Maggie a little better :-)

Do you enjoy playing in the band so far?

How long did it take to learn to play all the songs?

Maggie: "I'm still learning them, there's always something to improve. I had intensively practised for six months before I joined the band in January, and I'm still working on it." Was there anything that surprised you, something you didn't expect?

Maggie: "Various stuff, many different situations I haven't experienced before. For example when a string on my fiddle broke on stage and I had to fix it quickly. Or when we play in the summer, then the heat puts music instruments out of tune and it's much harder to play it."

Alice: "Don't you get surprised about what we say about boys?"

Maggie: "I got used to this a long time ago!" (laughs)


During this summer, have you noticed any good-looking fans who you might possibly marry in the future?

Maggie: "I think this isn't going to happen to me." (laughs)

Alena: "Well, I was telling myself the same thing untill it eventually happened." (laughs)

So do you prefer the golden boys of your hometown Tanvald? Have you ever sung?

Maggie: "I used to sing in a choir, but not solo. But I don't mind singing. I think I could sing in the future."


Has there been anything that scared you on the road?

Maggie: "Going on a plane for the first time. When we were flying back from the Faroe Islands, the weather was terrible and I was really scared. But now I'm used to it."


Do you manage to find balance between playing with the Country Sisters and studying?

Maggie: "It's been working out well so far. The question is how I'll manage it now, because I'm just starting studying at a conservatoire in Prague. But I think I'll be OK."


That's it! This has been the last part of the interview before Christmas. The final part will be published in early January, when the Country Sisters will come with a BIG ANNOUNCEMENT, so make sure to check it out!

We wish you Merry Christmas and see you here on New Year!