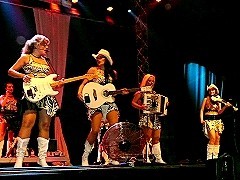 The Country Sisters play a blend of contemporary country music and country classics, but is country what they actually listen to in private? In today's portion of the interview you'll find out what the musical preferences and influences of the band are!

Speaking of music preferences, does everyone in the band love country music in the first place?

Sonia: "It used to be that way, when somebody played in our band, they listened only to country music."

Claire: "You know what, I'd say on the contrary. Everybody likes either country music music very close to country. Maggie like bluegrass and country, Alice likes bluegrass, country and rock, Alena likes country-pop and Andrea and I prefer country-rock..."

Andrea: "I'd rather say rock-country..."

Claire: "It's all very close to country. I don't think any of us enjoys rocking at disco." Alena: "I like country mixed with pop, but I also listen to modern pop. I don't mind any music style, though. When a song has a good melody and good lyrics, I love it and listen to it. It doesn't matter whether it's metal, rock, pop or country. I just don't like bluegrass very much."

Alice: "I listen to country music a lot and I like other music genres as well."

Alice: "I like to combine music styles in what I do, so I look for inspiration in various music genres. Sometimes I listen to hard rock or metal and sometimes it's for example jazz, rather guitars than trumpets. For example Rudy Linka, my favorite artist."


When there's such a variety in what all of you like, what kind of music can be heard in your car on the road then?

Claire: "In the car it's hits such as 'Twinkle Twinkle Little Star' and so on! This is an essential information: our DJ in the car is Pepa and he doesn't listen to country music! Just last week we told him he wasn't going to win the Country Dj of the Year award." (laughs) Claire: "But we were rocking to Shania the other day and that was also Pepa's choice."

Sonia: "That's true. When he accidentally plays something country, then we get such a kick, that we're jumping and the car starts rocking, which is what he doesn't like, so usually doesn't play country often." (laughs)

Claire: "But if you're asking who we listen to in particular, so that'd be Urban and Paisley."

Sonia: "Who else do we listen do?"

Claire: "All of us like Paisley, then Urban, Faith Hill and Wynonna."

Sonia: "Speaking of myself, I love Shania a lot. And then the classcs, that's clear. Dolly Parton is still great and she still plays, sings and writes amazing stuff. I never get bored listening to her. Or Emmylou Harris, those are my favorites."

Claire: "We can't get enough of ZZ Top as well. Or when Alice and I travel somewhere, we also listen to ACDC. Or Creedance, all of it is just great!"

The Country Sisters have fans all over the world and we already talked about situations when some of the girls fall in love and get married in countries they visited while being on tour. But what about fans who fall in love with some girls and don't get lucky? Tomorrow you'll learn stories about people who have tried to approach the Country Sisters with intentions other than just appreciation of their music...