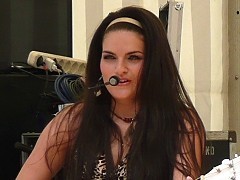 Earlier this month the Country Sisters announced a personal change in their line-up and introduced new band member Veronica, who we brought an interview with recently. Veronica has replaced Klara, who is leaving the band after 6 years. Today you can read an in-depth interview with Klara, who shares her favorites stories from tours with the Country Sisters and you can also learn more about her upcoming plans including her solo musical ambitions!

What are you going to remember most about playing with the Country Sisters?

"That's a bunch of memories, I'll always remember the essential moments like playing with the Country Sisters for the first time, when I looked like a fool with messy hair just running all over the stage just trying to make the show look energetic, it was a disaster!"

"I'll definitely alway remember that last concert, which will take place next month and I look forward to it in Albisguetli very much. Then when I sang with Carlene Carter at a private party, when I was watching Lonestar's show at a private club till dawn, then all the great parties with our fans in Denmark, Switzerland, France, all those beautiful places I've visited such as Canada, Greenland, the north of Norway... I know I wouldn't have got there just by myself!"

"I'm glad I have many photos of all those unforgettable places and events, so I can always remember all those precious moments." What are you going to miss most about the Country Sisters?

"I'll tell you what I'm not going to miss that much. I'm not going to miss all the travelin and sitting in the car for countless hours, because to get to the gigs from the Czech Republic always takes ages and I feel I'm just tired of all that. I'm going to miss playing of course. The stage, all that fun we have always had with the Country Sisters, that's what I have always enjoyed being the kind of exhibicionist that I am. Interaction with the audience has always been really amazing and energizing for me. I like meeting new people, both fans and people backstage."

"I'm going to miss the girls as well, because from my own experince I know when somebody leaves the band, friendships usually fade away in time. It's not because we aren't great friends, not at all, but the girs are on the road most of the time and there's not many opporunities to get together once somebody quits, that's just the way it is. But I'll be hoping to get to see them every now and then."


What would you wish to your successor Veronica?

"To have the nerves with technology on the stage, because sometimes it's not that easy, and also to forget as little stuff in hotel rooms as possible, which has always been my weakness..." (laughs) "I also wish her lots of concerts in beautiful places with wonderful people and of course to keep the great pipes for singing! I hope she looks around the world with her eyes wide open and tries to remember every single moment of it. And to enjoy all of it as much as I have! I'd like to thank Sonia for the wonderful opportunity, amazing experiences and six years of my life spent to the fulliest. I'm sure I wouldn't have gotten better musical experience anywhere else. I also thank to our fans for their never-ending support and words of praise, which have always made me happy. And to all the girls in the band I'm going to thank personally over a glass of something gooood." (laughs)


Will your fans get a chance to meet you at the Country Sisters' fan club parties in the future?

"Absolutely! I'm not going to hide and never show up again. There'll be a great concert to mark the 40th anniversary of the Country Sisters im Jablonec laterthis year and we've already bought a special present for Sonia, so I need to give it to her there, right? I hope to sing a song or two there as well. Than I'll certainly be at Wendy's country festival at her farm in September, where the Country Sisters fan club parties usually take place and I hope I've earned a lifetime invitation for that! And besides that if anything else comes up, I'll let the fans know through my Facebook page." The Country Sisters are on the road very often. What are you going to do with all those free weekends that you've spent working for the past 6 years?

"I'd like to know myself! (laughs) "I'll see what the life brings. I'm very much looking forward to compensating all that time with my boyfriend, family and friends and all those grilling parties, holidays and trips they had to go to without me. I'll also start going to shows more and ride a bicycle again."


Your last show with the Country Sisters will be in Zurich next month. What are you plans right after that?

"I plan to spend most of the winter skiing in the mountains and then I'll have to start working as anybody else." (laughs) "I've been keeping a part-time job at a music school my whole carreer with the Country Sisters, so now I'll do it full-time."

"Then I also work at a fitness center, where I'm a rebounding instructor, which is jumping on small trampolines and I definitely plan to keep on doing that. It involves moving to music, so I can also showcase my exhibicionistic side." (laughs)

"And most of all, if it's God's will, I look forward to hopefully get married and have a baby soon."


Do you teach only kids to play guitar or do you give private lessons to anyone?

"I can teach anyone, call me!" (laughs) "I enjoy teaching, not only do we play songs with children, but I also try that they find their way to reading music and classical guitar."


How about your music plans? You already released a solo album last year.

"Yep, and I'm excited about that even though I've listened to it just once since I left the studio. But I hear fans and fellow musicians that they like it, which makes me really proud." What influenced your song choices on the record?

"All the songs I selected for the album have been on my list of my favorite tracks for years. I also used to play most of them with other bands in the past."


Where and who did you record the songs with?

"The album was recorded in my hometown of České Budějovice at a studio of my friend, who has great ears for music and sense for detail. He is also a bandleader of Country Roll, which is a band where I used to play for 3 years prior to the Country Sisters and I'm glad that all members of this band participated on the record. Definitely it wasn't the last album and we really enjoyed making it!"


How do you see your solo carreer in the future?

"Well, I definitely plan to start my own band. I don't think I'll ever get to the level of the Country Sisters in terms of a number of shows as well as the size of stages, but that's not even my goal anymore. I'd rather play in clubs and at small festivals. I look forward to working with my friends from Country Roll, who helped me with my CD."

"We are all really looking forward to it, but it will take some time, as I plan to have a family first. But we hope to get it started soon!"

"Besides that I'm going to play with some bands as a guest. I'll play some blues classics with one of them and I also plan to play a part of June Carter in an upcoming Cash programme that we plan. Stay tuned and you'll see!"


Thank you for the interview.