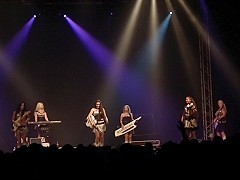 Have you ever had real sisters in the band?

Sonia: "We have. Around '98 there were two sisters and then we had twins in the band in 2000. So sisters once and then twins once. I think we might have sisters in the band again in the future, because Maggie's younger sister is very talented and she wants to play with us when she gets older. So maybe there will be sisters again." In the previous interview we were solving the matter of recruiting new band members...

Sonia: "The issue of future band members is solved for a long time... But what if you asked 'how do you keep in touch with past members?'"

How do you keep in touch with past members?

Claire: "And some of them are really great, we've seen them several times."

Alena: "I keep in touch with Lucy all time, becase we are very close friends. I also see Linda a lot and recently I met with Andrea Cejpkova, who just got back from Africa."

Andrea: "I suggest a question about how the Country Sisters form a new band member, that's also very interesting..."

Sonia: "How do you manage to turn a girl into a Country Sisters?" Andrea: "First the new girl puts on weight, then she loses weight and it may also happen that she has to borrow somebody's sweater to play in on stage, because her costume just doesn't fit. That's what happened to me." (laughs)

Sonia: "Then she changes the color of her hair, starts using make-up for the first time..."

Andrea: "Yes, I started to use a lot of make-up and actually bought make-up for the first time in my life..."

Andrea: "I quit drinking a little..."

Andrea: "And I also learned to go shopping!" (laughs)

In the next part we'll talk costumes: How many of them do the Country Sisters have and what influences the choice of costumes for a show? Find out tomorrow!