﻿﻿﻿﻿ Klara of the Country Sisters Released a Debut Album » CountryZone.net ﻿

Klara of the Country Sisters Released a Debut Album 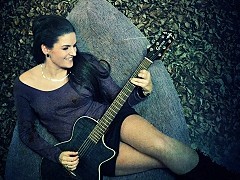 Klara Tibitanzlova released a debut EP single. A native of Ceske Budejovice, who previously played with Country Roll and the Country Sisters, is currently planning to pursue a solo carreer. To showcase her vocal and musical skills she just released a maxisingle "Klara".

In order to introduce herself as a solo artist, Klara recorded 5 of her favorite songs. "All the songs I selected for the album have been on my list of my favorite tracks for years. I also used to play most of them with other bands in the past," says Klara about the song choices.

The album features a selection of songs by Wynonna, Suzy Bogguss, Faith Hill and Keith Urban, which Klara recorded with her former bandmates of Country Roll. 01 Somebody To Love You

You can order the CD directly from Klara using the button below.

The price is 10 USD including free worldwide shipping!