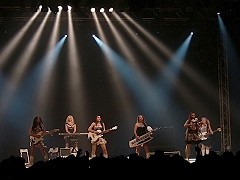 Yesterday we started a series of Country Sisters interviews. We're just getting started and you can look forward to lots of information and fun. Here's the second part!

What do you lose most?

Alena: "I used to lose umbrellas a lot. What else do we lose? For example we can't find make-up when we have a lot of mess in the dressing room..." And what do you tend to forget about at shows?

Claire: "We often forget to make set lists. Usually it's like in 3 minutes we were supposed to be 5 minutes on stage already."

Claire: "I also forget a spoon for Czardas." Claire: "Yes, Czardas is a story on its own. It's there to substitute cymbalo. Czardas is Moravian-Slovak-Hungarian-Russian thing and there's cymbalo everywhere."

Sonia: "We tried to figure out how to hit the strings with something to produce the sound of cymbalo."

Claire: "I've already played cymbalo on the guitar with a pen, brush, lip gloss, [soundman] Pepa's screwdriver, spoon and fork. It can be really anything, because I usually don't have the spoon with me."

What was the most akward item you've ever been asked to sign?

Sonia: "The place I'm thinking about nobody has ever asked me to. But sometimes fans ask girls to sign their belly, butt or other parts... For example today I've signed a mobile phone for the first time."

Claire: "Yes! We were asked to sign a display of a mobile phone with a permanent market, what a fool! Although quite old... the phone." (laughs)

Sonia: "Most of the time we sign various flags or T-shirts, that's quite common. That phone was pretty good, though."

Alice: "And money! In Denmark there was a guy coming up who wanted us to sign a 500 bank note! We told him he was crazy..." (laughs)

In the third part you'll find out how the Country Sisters play shows with American country stars and what it's like hanging out with them backstage. See you tomorrow!