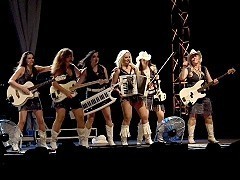 In the fifth part of the interview we talked about one of favorite hobbies of the Country Sisters. When they travel around the world, it's very natural that they go shopping very often. Today you'll find inspiration for the best gifts that would make the girls happy ;-)

What do you spend money on most on the road?

Claire: "On clothes, that's easy, just on clothes. In Switzerland there's cheese, the more smelly the better. In Denmark it's clothes, often in second hands..." Sonia: "You'd be surprised how even American women that we met were shopping at Danish second hands."

Sonia: "At second hands we also buy specialities such as paintings, antiques, china and so on."

Andrea: "By the way, before I joined the band, I used to go shopping twice a year, in summer and in winter."

Sonia: "And now you are forced to go shopping every week!"

Andrea: "It happened to me that I was with my boyfriend Tomas in Milan and I made him spend half a day at shopping centers!" (laughs)

Sonia: "And he said that the Country Sisters spoiled you!" (laughs)

Andrea: "And poor Tomas had to buy a T-shirt, too." (laughs)

Do you sometimes buy souvenirs when get to a place you haven't been before?

Alice: "Of course, for example beer openers. I also buy mugs. I have about 5 of those so far. Switzerland, Greenland, the Faroe Islands or any place that I find interesting, I buy a mug there." Alena: "I have to admit that Greenland really impressed me and I bought a lot of souvenirs there."

Claire: "Alice brought a great souvenir home the other day. It was one of those Swiss cheese and she couldn't leave a toilet for a week. It's not very ideal to carry cheese in a boiling heat in the car in summer..." (laughs)

Sonia: "We usually buy some traditional souvenirs in exotic countries we visit."

Sonia: "I also have several leathers at home and recently I was considering to buy a sheet blanket."

Sonia: No, they normally sell it as souvenirs, we bought it legally. It was the same with the seal. We didn't shoot it ourselves!" (laughs)

In the next part there will be a real speciality! As many of you know, Country Sisters have become a Youtube phenomenon this year and one of their videos from Interlaken has already had more than 4,000,00 hits so far. Tomorrow we'll bring the first official comments from the band on the overal Internet success as well as on thousands of spicy comments that appear below the video. Check back tomorrow!