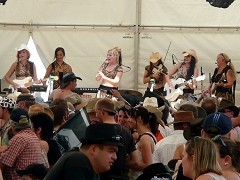 A number of Country Sisters videos can be found on Youtube, in which different band members appear. The fact is that each girl usually stays in the band for about 5-6 years, which is still above average in an all-girls band. Today we'll talk about the reasons and consequences of personal changes in the line-up.

What are the most common reasons for girls to quit the band?

Alena: "It's a family. They either want to start a family or they may get an offer to play somewhere else. But it hardly happens that someone would be offered to play in a better band. Most of the times it's that they feel they want to have a family."

Sonia: "The most common reason is logical, they get married and settle down. But it has also happened that someone changed her mind and decided to play different music, something other than country."

Andrea: "See, I am already through this part..."

Sonia: "You're right. You've gone the other way around. So these are the two main reasons. An extreme reason is, which happens like once in five years, that some girl can't stand another one and wants to quit. But that really happens very seldom." Sonia: "So maybe once in ten years."

Andrea: "In spite of the fact we are all girls in the band, we don't fight very often..." (laughs)

How many times has it happened that a girl fell in love in a country you were currently playing in?

Sonia: "Many times! Should I name them all? We've got the Country Sisters based all around the world. The closest is in Germany, Switzerland and Denmark, the furthest is in Canada and Australia, enough?"

Sonia: "Yes, most of them are in Denmark, then in Australia there two, in Germany there are two and in Switzerland there are also two."


Won't there be a new one in Denmark very soon?

Sonia: "Well, it really seems all of them will end up in Denmark one day..." (laughs)

Alena: "It hasn't happened to me yet, because my boyfriend Andreas has just moved in the Czech Republic. But in the future you may add me on your list, too." (laughs)

Sonia: "That might also happen. And if Linda eventually goes to Bolivia, the list of countries will be extended even more." Andrea is somehow quiet and hasn't said much so far...

Andrea: "Well, I'm still new in the band, so I'm quiet. When I am here as long as Claire in six years, I'll be talkative as much as her..." (laughs)

Sonia: "Wow, you're going to be here as long as her, that's great!"

Andrea: "If I am not expecting a baby by then, I will!"

Claire: "Hmm, now you made me feel like an old worn out broom..."

Today we've explained the reasons of personal changes in the band and tomorrow we'll talk about how the Country Sisters are in touch with former band members. You'll also learn a secret procedure that each new girl has to go through in order to become a Country Sister!