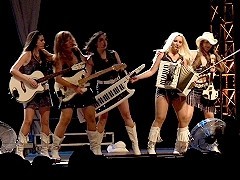 When you are on international tours so much, does it happen that some fans fall in love with you and maybe even propose you to marry them?

Sonia: "Actually we get marriage proposals quite often. You see girls getting married all over places, where they eventually settle down."

Alena: "Very often! It happens to each of us. You can just read some comments on Youtube and you get the picture immediately." Sonia: "Because you're too young for it!" (laughs)

Alice: "Recently somebody came up to me and said 'last time you promised you would marry me!' and I was like 'I've never said anything like that!'. Oh yeah, that happens..."

Andrea: "I hope my boyfriend Tomas won't be reading this!" (laughs)

Sonia: "But sometimes there are some crazy fans who really fall in love. What can we do with them...?" (laughs)


At concerts and festivals there are usually no bodyguards. Have you experienced any unpleasant encounters with some annoying people?

Claire: "You bet we have. For example when we played in Austria once, there were really drunk people. One of us was walking across the hall, carrying her meal on a tray in one hand and a drink in the other, when somebody suddenly came up and put his hands on her tits. And now what was she supposed to do with full hands and no table around. So she just gave him a loud talking to..."

Sonia: "Or sometimes they slap a butt..." Sonia: "When we played in Daubitz, I was filming a video from the audience and there were some crazy teenagers who were slapping my butt in the rhythm of the music. I was holding the camera and all I could do was just to kick behind me. And then some lady kicked them out." (laughs)

Claire: "Another incident happened to Linda, who used to hang from the stage with her head down playing 'Orange Blossom Special'. When we played in Austria, a drunk asshole came up and licked her belly around the bellybutton."

Sonia: "Regarding bodyguards, sometimes we would really need them. But on the other hand, when we play big festivals and there's more risk, bodyguards are there as well as barriers around the stage. Also when we go to get something to eat, the bodyguards accompany us everywhere. But I'd say that country music fans still aren't as wild as rock music fans."

Claire: "We just need to show some mean people that they just can't dare to treat us that way. But it happens rarely. Most of the time when we sign autographs after the show, fans smile at us, they ask for autographs very politely and they are very kind."

Alice: "The worst is when people get drunk, because then they tend to make troubles."

Claire: "Yeah, when he wanted to take a picture of us with the wrong side of his iPhone and there was a giant eye blinking at us! (laughs)

Next time you'll learn what many of you are dying to know. Are all of the Country Sisters on Facebook? Do all of them read messages on the official Country Sisters profile? Do they respond to the messages? Do they mind when fans send them friend requests to their private Facebook profiles? Check back tomorrow to find out!